Two days ago, I was bored with knitting. Not knitting itself--just everything I was knitting. The lace scarf was disappointing, the Warm Up America blocks were boring AND not using up stash, the January Aran was scaring me with its threat of steeks, and I had restarted the Kauni cardigan for the fourth time using the alternating colors on every-other row and while it wasn't rolling I just wasn't crazy about the way it was looking 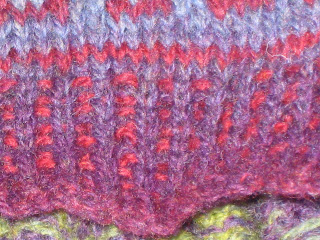 I was SOOOOO close to ripping it back...but then I discovered that what I had initially read as 3 inches of ribbing was only 3 centimenters, and after ripping back about 6 rows I decided to plunge ahead.

There are a lot of steps between bored & obsessed, and other knitters might be able to visit them. I, on the other hand.... 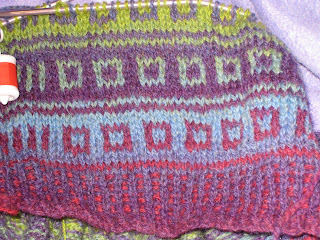 Did you notice the lack of content on yesterday's post? That's because I can't type while knitting. I am OBSESSED with this sweater. I LOVE IT!!! If the wool weren't so darn scratchy I would sleep with this sweater. I finally love how the colors are lining up, and if the relatively slow progress of knitting can ever be called "exciting," it is exciting to see how the colors change and line up. I have worked on this for so long my eyes were starting to cross, so I finally shoved it into a bag and... 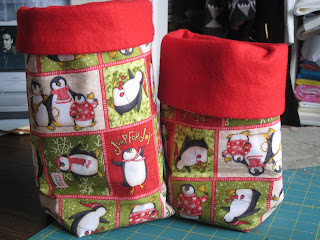 My March Project of the Month is done!!! I originally planned to do more than 2, but as cute as they are, they don't have handles or ties or anything and I'm not sure if they really make good wine gift bags. As decorations, though, aren't they adorable?

Since I still had a lot of felt, I decided to branch out a bit. This one is waiting for a hem and handles 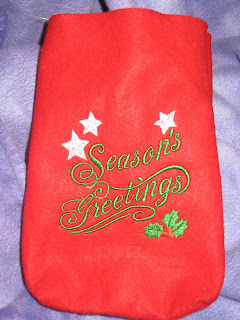 and this one is just finishing up on the design 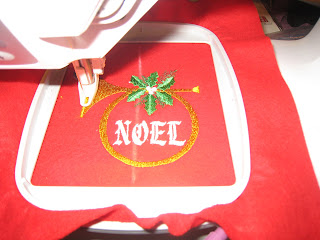 and I have 3 more cut out. And you know what the best part is? I can work on the Kauni cardigan while the sewing machine does the embroidery. I'm craft multitasking!!!