So aside from incurring the world's silliest injury (and being so pale as to resemble a plucked chicken), there has been some crafting this week. While we're still on the subject of painful things, I was zipping along on the second wedding scarf (due in late October) when I thought it might be a good idea to double-check the pattern directions which said that with the tubular cast-on, I could remove the provisional yarn without the scarf unraveling.  So I did: 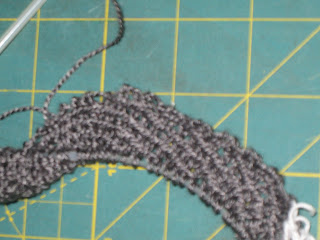 The good news is, it does work.  The bad news is, I sort of hate how it looks.  I didn't get a very good picture of it, but it just looks loopy and weird.  And remember, this 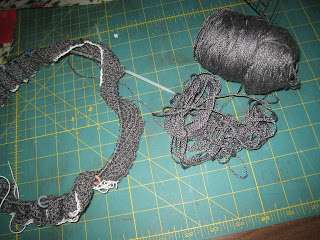 is the SECOND scarf.  One scarf is done and waiting for me to master the cast-off that is supposed to "match" the cast-on that I don't like.  LOVELY.

There are just times to cut one's losses, no matter how painful.  I will find a way to fix the first scarf, but I ripped out all of that work to start over with a regular cast on and make a scarf I can stand.  To make matters even more fun, the yarn ball barfed up its center after creating some lovely knots, so there is a fair amount of ill-will with this yarn currently, making ALL OTHER PROJECTS look fun by comparison.  Which is good, as there's a lot of them.

I finally dragged this table runner back out and embroidered ornaments on the remaining two squares. 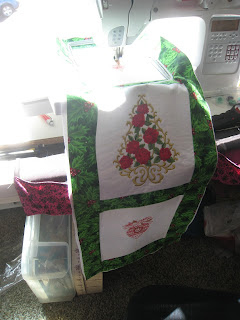 I had to wait until enough time had elapsed for me to forget how awful it is to work with metallic thread.  And now we've relearned that lesson..... 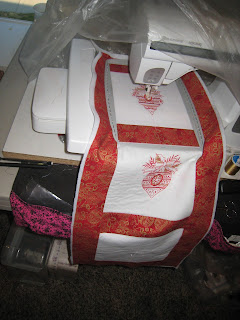 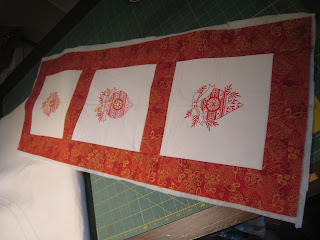 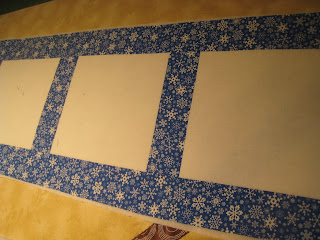 which would probably have been more "winter" themed without Christmas ornaments on it.  Oh well.

I also dug out a piece of fabric I'd cut (ok, torn) when I made the original ribbon runner, 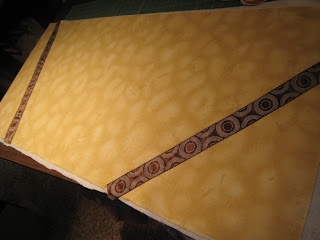 and while I was attaching fusible fleece to everything else, got this one ready to go and have already started adding ribbons.

My IDEA for the last batch of table runners morphed into this: 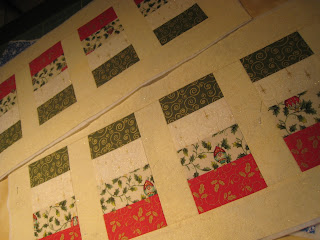 which I'm not sure I really like--which is why there are only two of them.  They're all ready for free motion quilting, then I think I'll bind them with the multi-colored print, 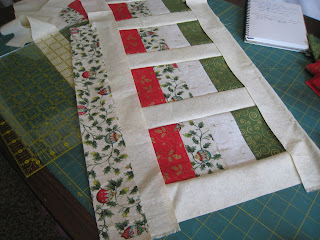 and hope that I like them a bit better.  I still have a lot more strips cut out, but I can try something else with them later.  If I get all of these finished, I might be set for Christmas/birthdays for a while.  Unless I have miscounted or make a whole bunch of new friends suddenly.....