The Ugly Sweater Party Is Coming!!!

The last party we had was about two years ago now.  I had already sent out invitations for a Christmas party, and luckily had made it a "Share your traditions" party where everyone was to bring the food that was most traditional for them for Christmas, before landing in the hospital with my back.  So, we went ahead with the party with me drugged heavily and my friends had decorated the house for me and all the food came with the guests.  But since then with all the back issues, we haven't had a party since, which is my longest dry spell EVER.  So this Sunday we are hosting an Ugly Sweater party, which explains the lack of blogging.  The decorating is almost done, 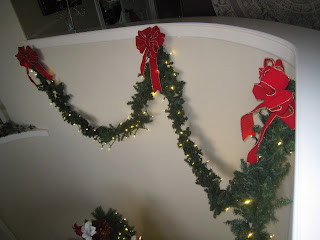 including the swags which I was thinking might be the hardest on my back.  We got some shorter light strings, however, and this took about 15 minutes and didn't hurt at all.  YAY!

I did have one bad day this week, so I spent it making my Ugly Christmas Sweater, 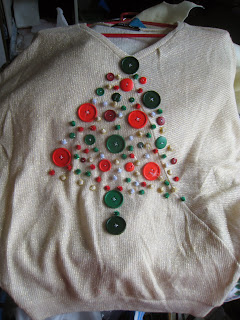 since I have never owned a Christmas sweater.  It took us a few tries at thrift stores (charity shops) to find sweaters to decorate because I didn't want to do anything to a nice sweater, but this one 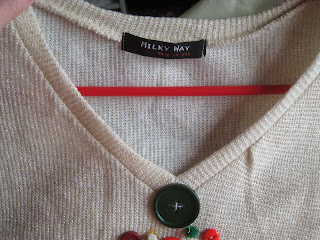 had a big pucker right in front out of carelessness, and funnily enough was THE only sweater I found that was actually made in the USA.  There are prizes for the top 3 ugly sweaters, though Andy and I as hosts are ineligible, and knowing my friends my sweater is likely to be among the least tacky.  Top prize is likely to be a jar of carrot salsa, so competition is fierce.

I have gotten a little crafting done, including 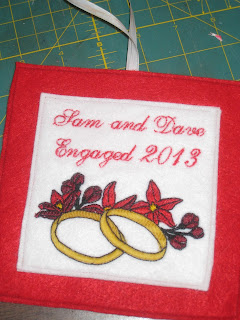 a Christmas ornament for the newly engaged couple, which I mailed off yesterday, and 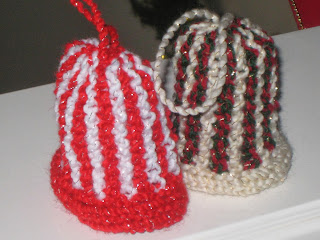 two new ornaments for the Holiday Music Stash-Dash, as well as 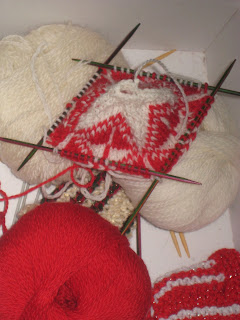 another color work ornament started.  I have 3 Christmas gifts left to make, but we have a party to go to Saturday night, our party to get ready for on Sunday, and a strong chance I might have to spend Monday on the heating pad, so that sounds like Tuesday's project.  Or one of them, at any rate........