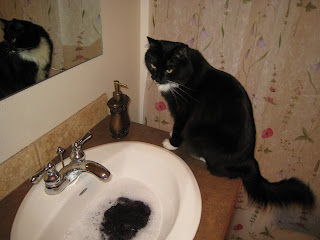 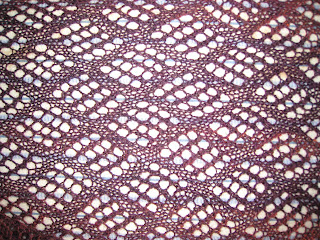 and instead of diving head-long into the stash to start 3 new things, which would generally be my next move, I have apparently contracted a little known disease called "finishitis." This is possibly the first ever documented case in the knitting community. Unlike "starteritis," with "finishitis" the victim is irrationally compelled to finish projects--a very desirable state, of course, but the long-term effects of this condition are as yet unknown.

High on the thought of finishing four or even five projects in a single month, I pulled this out of the WIP pile: 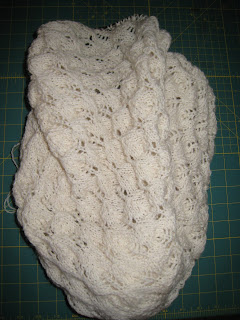 and have knit 3 rows already. This is the start to Fir Cone Square Shawl from Cheryl Oberle's Folk Shawls book, which was abandoned about 7 months ago when the intended recipient said she didn't actually want a shawl for her birthday (which later led to the music quilt--which she will get far more use out of quite honestly). It isn't the shawl's fault, so I have decided to finish it. To be honest, I think most people are not "shawl people." I wear shawls because I have learned to wear them because I make them, but if I didn't make them and someone just gave me one, I would thank her profusely and shove it into a drawer for the rest of its life--maybe bringing it out to show people my friend's handiwork and generosity, but never ever wearing it. It's the granny image. If I were an old Russian woman fleeing my homeland because of the Cossacks, well yes, then I would wear one--then a shawl seems not only appropriate, but sort of mandatory. As it is......I wear them because I have so much of my time invested in making them. Let's face it, after 6 months and almost 1500 yards of yarn, if it weren't summer I'd probably be sleeping in the Lady's Circular Cape.