We Don't Have Hat

So....last night when I was about halfway through the edging on the hat, it became quite obvious that I was going to run out of yarn. I ripped back, then thought I would just do a normal K1P1 ribbing rather than an edging so I could just stop wherever I wanted, but by the third round it became obvious that I had far too many stitches to create anything even resembling a hat ribbing. So, I ripped back again, then ripped back a few extra rows for more yarn, then started the edging again--this time using one less stitch. Which brings me to here: 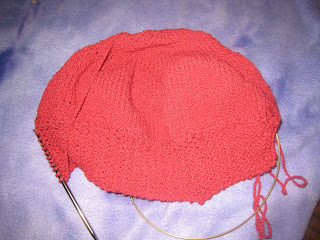 Since all existing projects were basically thumping me, I moved on to an idea for an upcoming birthday gift--copying from a similar project I ran across in a book.

I cut 3 circles of about 4.5 inches in diameter (turns out a vase downstairs makes a perfect template), then putting the right sides of two together, did small seams of about 3/4 of an inch (turns out it will need to be about 1/2 inch seams, but we'll get to that in a minute. 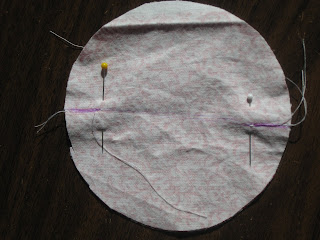 That created 2 circles held together only at the edges, and when the circles were folded in half with the wrong sides together 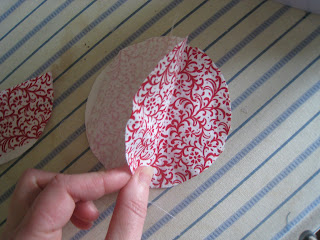 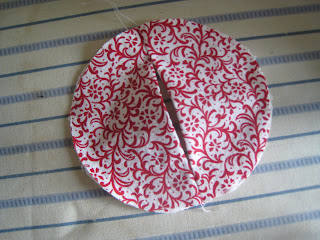 Then taking the third circle right side toward the best looking side of the first piece, I sewed around the edges, then clipped the curves: 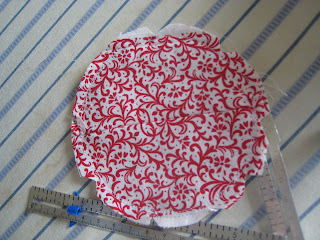 The strange white spot is the selvage. I used scrap material for my prototype.

Turning it right side out and pressing it all flat, I was left with 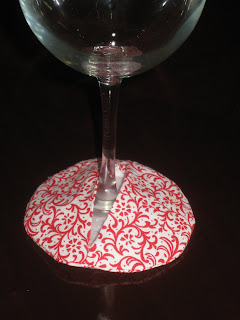 I think I'm going to make a set in Christmas colored crepe back satin for a friend. If they're all slightly different, I think they'd be really helpful for parties--maybe with satin stitching around the edging to add a little sharpness? Thoughts?

She who is foolish enough to brag about a project being done the following day will spend the night ripping back because she is running out of yarn.
Posted by Toni at 7:16 AM 1 comment: