At Least There Is Progress

Thanks largely to Theo's help, I'm getting up a bit earlier than usual and getting in a little crafting time before my day gets going.  Not that this was actually my plan, but it is working, so who am I to argue?  Besides, Theo does not have a snooze button.  So, the February birthday socks are moving along at a decent pace: 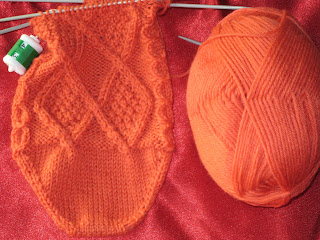 and I'm liking the results, though I think if I were to do them over, I might start a reverse stockinette stitch triangle to build into the first row of the pattern, creating a diamond effect.  I'm not sure I like the abruptness of the switch to the pattern, but I really liked how this looked on the leg of a pair of socks I made for Andy 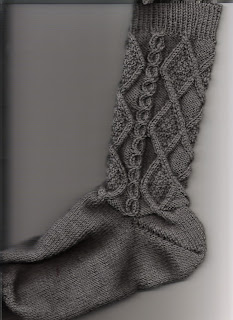 and I wanted to play with having it start on the foot & having that little coin cable run all the way up the side.  We'll see how it turns out.

And if you're wondering why the scarf is now really long 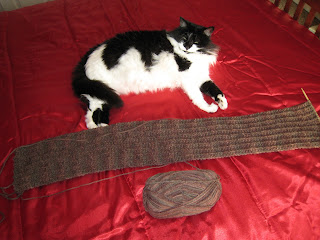 that would be because I can't do cables at Theo's new wake-up time, nor after about 9:00 PM thanks to Theo's new wake-up regime. So there has been lots of mindless knitting....and discussions of who exactly picked Theo out at the pound anyway....

I have also started the doll scarf: 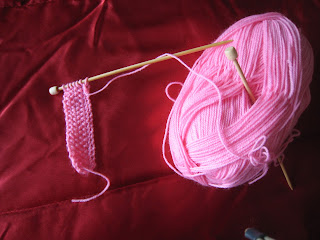 which is going to be all in moss stitch because to have enough stitches to do much of a pattern I would need smaller needles, which are not the friend of a woman working on a deadline...unlike, of course, chocolate, caffeine, and a complete lack of sense............
Posted by Toni at 4:04 PM 4 comments: