I've never done applique with the embroidery machine (actually, I've only done one applique in my life), and while I love the cleverness of the designs in the set Andy gave me for Christmas, the instructions do presume a level of basic knowledge which I don't have.  I was hoping for some suggestions on what type of material to use, as a few minutes with Google only turned up a suggestion not to use fabric that is "too" prone to ravel.  Satin is prone to raveling, but I wasn't sure if it ravels "too" much or just enough, but as I couldn't think of anything else to use--nor find anything sort of shiny that ravels less. 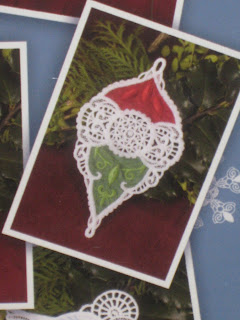 they did color changes with the thread AND used two colors of fabric.  I decided to stick with just one for now, as the design wasn't too specific about how it was going to work.  I pulled the design up with my embroidery software and walked through the design, so I knew that it used thread changes to walk between steps, and I hoped they'd be clear as we went through them.

Using two layers of water soluble stabilizer, I hooped up and started.  The first step is an outline of where the fabric goes.  First lessons learned:  a little fabric glue can really help at this point, and one needs to cut the thread in order to get the fabric in the right place.  Good to know.

Then the machine stitches out the design (those three leaf things), THEN the outline of the applique.  I guess this makes sense, so if one wanted to change thread colors, one wouldn't have the wrong color on the outline, but this is why the fabric glue would help. 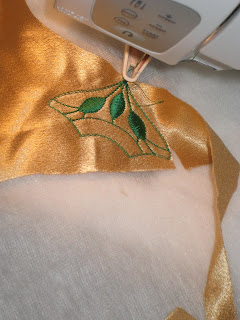 Then the machine stops so you can cut away the excess fabric. 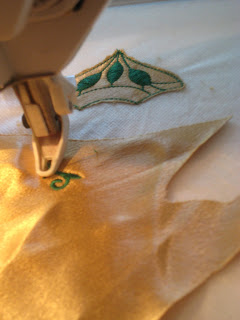 Not as easy as it sounds.  Knowing I wanted to try this, I bought applique scissors a few years ago, but had never tried them.  It seems they might be something one needs to practice with, as I had to trim again with my embroidery scissors to get close enough to the stitching--or almost.  After doing the second piece, I ended up with this, 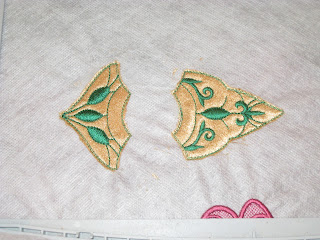 and was getting rather excited about this ornament.  I'd been a bit worried that green and gold might look like a college football team or something, but 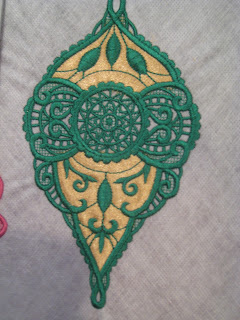 I love the result!!!!  The stabilizer still needs to be soaked away, but I am really pleased with the results.  So much so that I tried a second design, 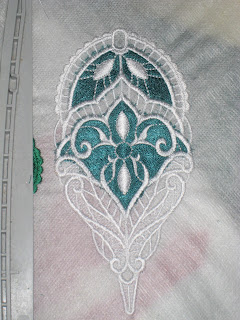 with not-as-great results.  I don't know if I really did a much worse job trimming this one, 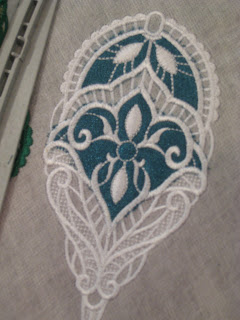 or if the white doesn't cover as well, 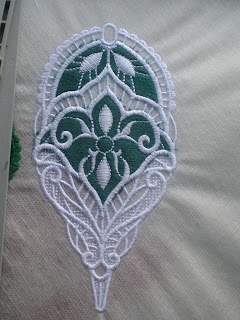 or if the design doesn't cover as well, but on this one the fabric edges REALLY show through.  Who would have thought that the hardest part of this would be the cutting?

Because I didn't know what I was doing, the ornaments weren't ones that I could start and move on to other things as Jeeves embroidered, but I did take a break after the second ornament to scrounge out these, 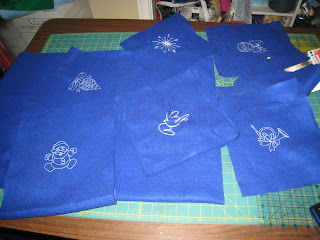 and cut out felt strips for handles. I hope to finish these up today.  And this: 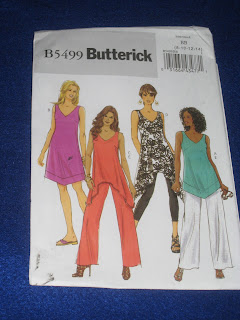 is my current apparel-sewing project. The pattern calls for lightweight linen or broadcloth, but for something to wear around the house, I thought the cotton fabric I used for the gardening dress would do nicely.  It's pretty thin and light for cotton, so should work like broadcloth.  And my notes showed that the piece of fabric was originally 12 yards, so I would have PLENTY of fabric to make the outfit shown in green and white.........

Or not.  After cutting out the pants, I needed 2 1/8 yards of fabric left for the top, but what I had laid out on the floor looked suspiciously less than two.  And IS less than two.  If the 12 yards thing had been correct, it should have been about 5 yards left.  I guess the GOOD news is that I'm branching out--usually I leave the math mistakes for knitting.  I decided to go ahead and sew the pants together, and through a lucky scrounge of the sewing room.............. 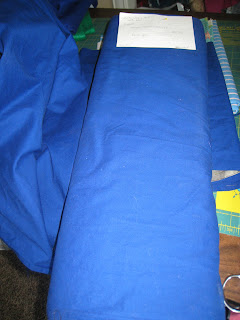 I found another bolt of the same fabric.  Thank heavens--not that I couldn't have made the shirt in white or a print, but that can be later if I like this. I hate to admit that my fabric stash came to my rescue here, but.............