Knitting on a Knitting Blog?

Really, what is the world coming to? 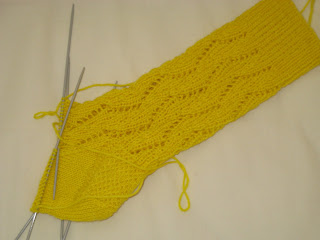 I have taken a bit of a break on the sewing marathon to give the sock a bit of attention, and I have turned the heel!  It's a really interesting heel 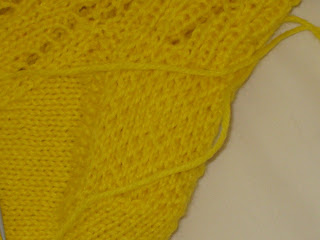 I've done the gusset decreases & am now just at the foot knitting, so I'm hoping that moves pretty quickly.  I have a whole second sock to do, after all......

Not that I've taken a break from sewing entirely.  I decided to take a break from garment sewing, so I played around with my first attempt at applique.

I was pleased to find that there is actually something good about all those darn reply cards packed into every magazine, 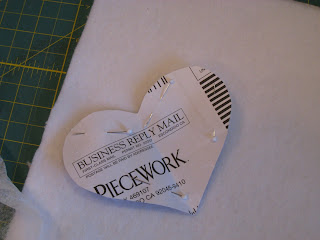 I don't know if I have used fusible webbing before, but I have quite a bit on-hand, so it's possible.  I decided to use felt to start with, as I was thinking a looser zig-zag might look good 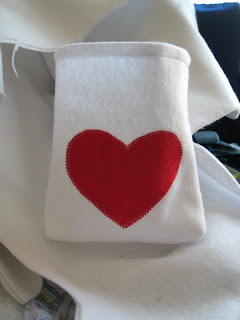 though if I were to do this again, I would use a satin stitch.  I haven't decided if I should add a handle to the little bag or not, and if I do, I want to incorporate a little red decoration somehow.  I would normally use decorative stitching, but that is one area that Bernie just isn't really that good at.  Maybe I'll have to wait for Jeeves.

Speaking of which, after TWO calls to the dealership, they finally called me with an update:  the part is IN and should have been shipped out to my dealer today, and I should have Jeeves home in about 2 weeks.....or about 9 weeks after taking him in for those of us who are counting.  Still, I won't complain....or won't complain more than I already have.  At least the part has finally been made/invented/whatever and there is an end in sight.  Interestingly enough, when I sarcastically wrote that I was hoping to get Jeeves back by the end of August, I was actually being a bit optimistic.  At least I should have him back in mid September at the latest.  Hopefully working this time.  I suppose I might have felt silly buying Bernie and then getting Jeeves back just a few days later.....but I think I could have gotten over it.......