My jury term is over!  Admittedly, I wouldn't have really minded were it not for the "no knitting" rule and two and a half hours on a hard bench.  No one can be enthusiastic about civic duty when it requires one of THOSE physical therapy appointments that leaves one with a very tender backside.  Luckily, 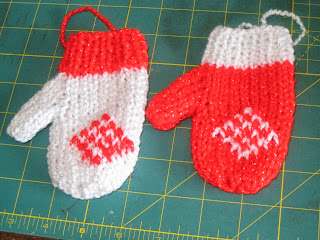 There have been a couple exceptions, but none involving the big stuff--yarn, fabric, thread, notions.  I don't know if I'm more amazed or proud, but shocked would have to be in there as well.

My crafting vacation begins in 2 weeks and 2 days, and there are a few things I need for my crafting spree.  The problem is, after a full year, I'm just not ready to be released in a fabric store on my own.  I don't think it would be pretty.  BUT I want to embroider some new ornaments, make more terrorized gingerbread men ornaments, and generally get ahead on ornaments again, and I am out of tan felt and embroidery thread.  I thought about placing an order for stuff on November 1, but everything takes about 2 weeks for delivery, so I have decided on a compromise.  Making sure I wasn't feeling stressed or anxious or giddy, I sat down with my list and picked out the immediate needs, and placed an order with Joann's.  They have terrible customer service, but I'm hoping it will arrive during my vacation.  If not, I'll have to wait and see if I feel like I can handle an actual store.  If by some miracle Joann's isn't insanely slow and it arrives early (and pigs start flying past the house), I'll just set it aside until the first.  I debated about it, because it feels a bit like cheating, but it also feels like the safest approach.  I'm just thinking that taking someone who has been fasting to a buffet might be courting disaster.....................:)