I spent the weekend with my parents to see how they were coping after the hip replacement surgery.  My father is almost speedy, having given up the walker a few days ago and now, only 3 weeks after the surgery, walking better than he has in the last couple years.  However, it is still very much winter there, and being unable to get out and about for 3 weeks is getting to him.  I don't blame him--I'd be going stir crazy and I can knit when confined.  Speaking of, meet the weekend project: 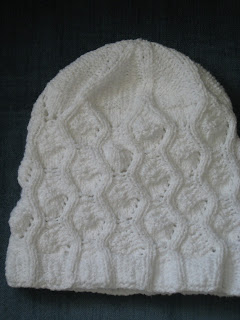 Yet another chemo cap.  My mother wanted one for a friend with cancer, so I started it on Saturday, finished it on Sunday, and I think it is on its way to its new owner today.  Personally, I prefer it when the caps sit around and are totally and completely useless, but at least MOST of them are still not needed. 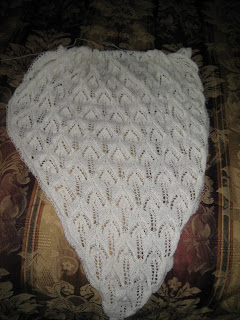 and is now almost to the point where I will divide for the "v" of the sides.  I think that might make me close to half finished on it.

I also managed to find some buttons for the craft jacket this weekend, 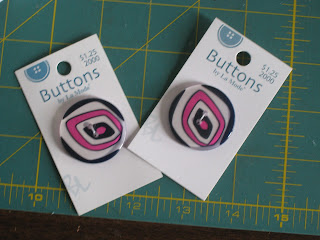 so that will be finished up hopefully by tonight, though there is a small, rather angry somebody 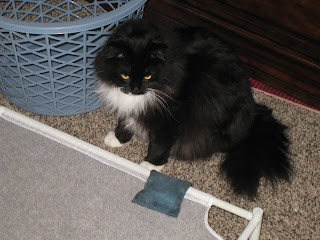 who feels a bit neglected and hasn't stopped telling me off since I got back about two hours ago.  I have explained very nicely that cats usually do not enjoy road trips, and that there are dogs at the ranch who probably wouldn't enjoy a visit from a strange cat, but I just don't think I'm getting through to him.  Looks like there may be some extended groveling tonight.