He doesn't get one: 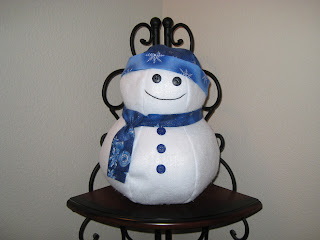 Truth be told, I almost never give snowmen noses anyway.  Of course, this decision was helped along by the fact that I didn't have any feltable orange yarn either (can you tell orange is my absolute LEAST favorite color in the world?)  I may eventually add a pompom to his hat, or the pattern calls for earmuffs made from a 2-inch pompom and a pipe cleaner (at least I have the pipe cleaner), but I thought he was pretty adorable as-is, so he's now on the shelf in our stairway.

In the future, I'll be doing something different for snowmen scarves.  The scarf Frosty has is actually two bands--one going around his neck, and one draped over, then gathered to look like it was tied.  It would have been far, far, FAR easier to just have one band and actually tie the thing than to fuss around with making this one look tied, so his buddy with the red buttons will get a real scarf.  Maybe even a knitted one?

And we finally have a picture of the latest finished chemo cap, 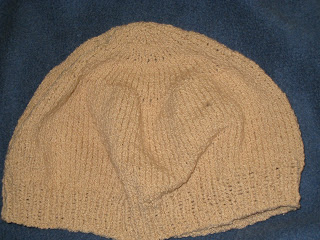 One dishcloth is also done, 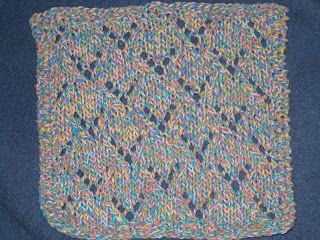 which I am counting as 1/2 a project.  The second half is progressing, 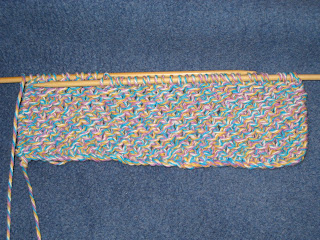 thanks to Judi's suggestion of the Chinese Waves pattern.  This is a bit slower, but it's making a really thick cloth, which should be good for scrubbing.  Basically, the gist of the pattern is to cast on an odd number of rows, knit the odd rows, and alternate even rows between K2, [slip 1, knit 1] to end, K1; and K1, [slip 1, knit 1] to end.

And lest you think I had enough to work on with all the existing projects and long-languishing WIPS, I have started the scarf for my niece, 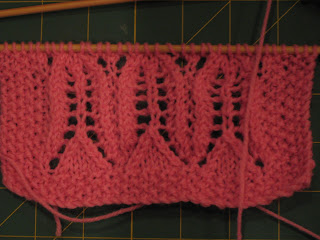 which even with just 35 stitches is going to be really wide for a 5 year old, so it might find its way into the hands of an older niece, but I like how it's looking so I didn't want to restart it--having already done so TWICE.  We'll see how quickly I can get this moving, as I need SOMETHING for a gift in March.

How many hours of sleep EXACTLY does the human body need.....?