A Little Different Than I Expected

So, I actually thought that life would get a little bit easier around here with Theo's cast off, didn't you? He was moving around so well that I thought they'd take the cast off and he'd be thrilled and would start using the leg immediately. Obviously, it's been years since I broke a bone and have never had an injury this serious.

The cast is indeed off, 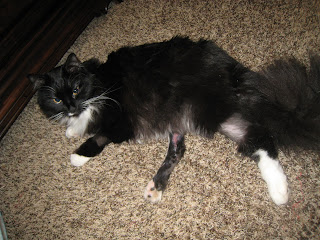 and his leg muscles are atrophied and sore, and there is so much scar tissue built up around the ankle joint that he can't bend it right now. With a little coaxing, he will lower it to the ground but without any weight: 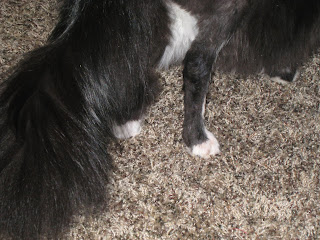 Through all the frustrations of the casts, his leg didn't really hurt (except when he ripped casts off repeatedly). Now, it does hurt when he uses his leg, which scares him, which makes it worse. So, today he's confined to the bedroom (we moved the mattress to the floor several weeks ago), and I spray the room with kitty pheromones every 8 hours to calm him down. The vet gave me some exercises to do with him, but in reality, he really needs more than I know how to do (or would have the heart to do), so tomorrow we start taking him to physical therapy twice a week. Yep, kitty water aerobics. They have promised I can come and take pictures.

Aside from being shocked that I'm doing this to a cat, it will be a relief to have trained professionals watching him all day twice a week. He's needed almost constant supervision for 6 weeks, so I haven't been able to do much. I'm excited about grocery shopping tomorrow, if that tells you anything.

The good news is that the bones have healed nicely, the staph infection seems to be gone, and Theo is going to be fine. The bad news is, we have no idea how much motion he'll get back in his leg. Still, at least he's still with us, and who knows--with therapy and exercise he might get full range of motion back about the time we get all this paid for.........