So Theo has figured out what Fridays mean and when they occur, because he's with me as soon as I wake up.  And we certainly did a lot.  We hooped some embroidery, 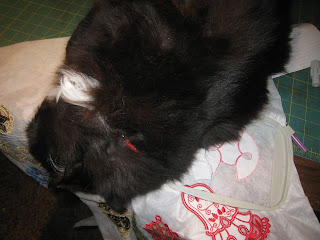 furred up a table runner, 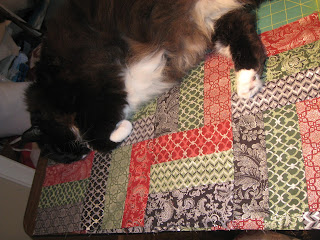 and spent a lot of time trying to figure out which thing to lay on to be MOST in the way.  The poor cat--he was up and down on to this piece of fabric, then that one, but I have discovered that 3 projects is the optimum number to make sure that I have access to at least ONE at any given time.  So, I finished two new ornaments, 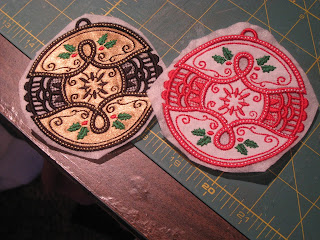 got the rest cut out, and then plopped them in the sink to remove the stabilizer.  (Theo doesn't care much for that part).  I also got a table runner finished yesterday, 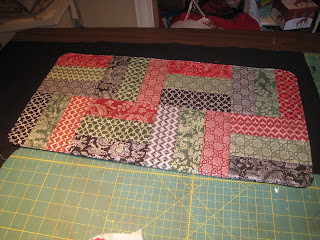 and prepped a second that I just finished up this morning, and got this ready for hemming: 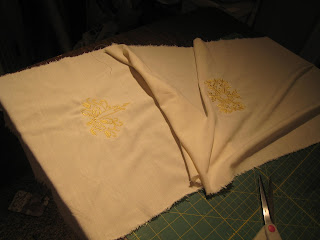 It's a simple table runner on a woven poly-cotton blend that ravels like crazy, but I bought this fabric at least 2 years ago with this exact project in mind, but had never gotten around to it.  I was originally thinking ivory thread on ivory, 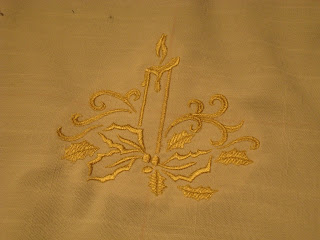 but last fall I bought this set of Christmas one-color designs, and I thought gold thread would look nice on the ivory.  Being ME, of course, I bought enough fabric to make several, so I will try one with ivory on ivory in a non-Christmas design, but I like this one.  I'm hemming it rather than backing it because I like the drape and the ones you buy are almost never lined. I might switch to a wash-away stabilizer for the back as the cut away stuff is just a bit visible if you look hard enough, but I think it looks good.  And I don't think I've used this design set yet, so that makes me feel good.  The embroidery design stash doesn't take up any physical room, but I do have some design sets I've purchased and not yet used, so it's mental stash.  And I think I'll end up with 4 or 5 of these runners, so that will make nice gifts AND use up another fabric in the stash.  With the one I finished up this morning, I'm just over 59 yards of fabric for the year.  It's been a drastic slow-down since I started working, but maybe as my back gets stronger, I can do a little sewing every night and still keep on track for at least 100 yards.  Only 41 yards to go, after all, in 7 months, and I think that is doable.  Especially if I get really desperate and finish a few WIPs......................