And Where Did We Leave Off?

So............where we last left off, we had countered a ridiculous offer on the house and I had accepted a new job.  We spent that weekend doing counter- and counter-counter- offers on the house, and while we were waiting Saturday to hear from our realtor, my cell phone died COMPLETELY, so we got to spend Saturday night at Costco, but Sunday we finally agreed to a deal on our home, and two things were down.

Our realtor was heading out of town the following weekend, and with a pending offer we didn't have any showings, but weren't going to pack until after the inspection in case that killed the deal, so we had a weekend off!  Right until we had to take Callisto to the kitty emergency room.

She's 13 or 14, and was throwing up and not eating and just not looking good, and they, of course, ran very expensive tests, asked to run even MORE expensive tests that weren't really going to tell us anything definite but would probably have made a nice boat payment for one of the vets, told us it was probably kitty lymphoma or inflammatory bowel, sent her home with meds she wouldn't take, and we pretty much thought we'd have to put her down.  I do think we would have lost her had she not spent the night in the ER on fluids, but whatever was wrong, they totally misdiagnosed it.  She regained her appetite, I got a partial dose of the steroids down her, she got sick and lethargic again, and we had prepared ourselves for THE trip to the vet the next day, but she had perked up by morning and has mostly been okay since--without the meds.  We still don't know what was wrong, but she's happy, eating, and mostly her old self, so we're leaving her be.

And the new job?  Kind of disappointing, to be honest.  I like most of the other salespeople, but I'd say only one isn't looking to leave and no one has been there longer than a year, and if it weren't for the local manager having a different philosophy than the rest of the company, no one would have lasted a week.  I don't hate it, and it's nice to have a second income again, but I am going to keep looking.

Meanwhile, the home inspection turned up water in the crawl space, which isn't surprising after the winter we have had, but it a horrible thing to happen in an inspection.  We're in a 15-year-old house on a HILL in a desert state and have rationed irrigation water, but NOW because this particular inspector has a big reputation as the "mold guy" and brought in his buddy (whom we've heard pays referral fees to inspectors for this) has proposed this huge drainage project including a sump pump, and because our buyers are first-timers, they don't really get how much overkill that is.  So I've been tracking down other companies to get bids on this, but we're probably going to get stuck paying a stupid amount for something the house doesn't need, but according to the general manager of a reputable disaster company, we're actually getting less screwed by this "flood expert" than most because right now his going rate for scaring people into things they don't really need after our 100-year winter is $7000 or more.  Interestingly, this home inspector totally missed a cracked window pane that we had left to be found in the inspection so a warranty for replacement would go with the house, and said the dishwasher leaked without actually running the thing because there is some discoloration on the floor from a leak several years ago that we already fixed.  We won't be hiring him to inspect the house we're buying.

THEN with our realtor back in town, we spent Wednesday night, ALL weekend, and Monday looking at houses.  We found two we really liked, and I wanted to want the second one because we're taking a loss on this house and I wanted to "get a deal" on the next house, but there were just too many strikes against it, including just as much or more traffic noise than we already have.  We have been negotiating on the other house, and just signed the deal last night and are in high packing mode!

SO, that's the last few weeks HERE.  I have to say, almost losing my cat--jerk that she often is--was the most traumatic part of this, and our buyers have been really nice about moving the closing date for us, so we let them bring her parents in to see the house, which is a bit unusual, but I'm sure we'll all be glad when this is over.  Meanwhile, trying to deal with the traffic in and out of our subdivision every morning has reinforced my desire to move and the new house has a FABULOUS kitchen and more hobby space for each of us--plus everything but the sewing room is on the main level.  YAY!  And it's quiet.  And in a nicer part of town surrounded by MUCH nicer houses, so pretty much everything we'd hoped to find.  We hope the way it will work is that we'll move out of this house the day of or before closing, close on both houses, then move to the new one the next day.  I'll board the cats, find foster care for our plants, and we'll spend a night in a hotel.  Not bad.

And, since there was that one Saturday before Callisto had to be taken to the kitty ER, Theo and I did a couple more watermelon bunting slices, 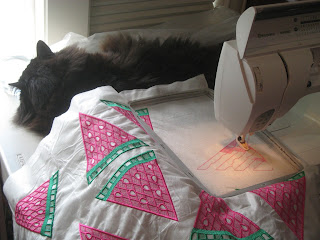 and I embroidered two more towels, 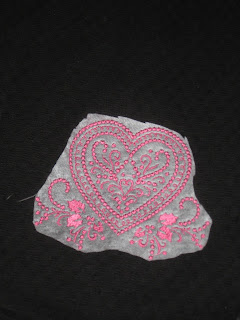 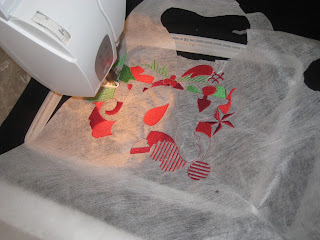 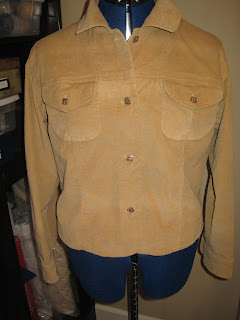 I finished the jacket!  This was deep stash--probably from 2006 or 2007, and a real struggle to work with because of the stretchiness of the fabric, but I'm pleased with the result and the fabric is SO soft that I'm sorry I didn't buy enough of it to make the shirt for Andy that was its original intended purpose.  Oh well.  I get a soft jacket and 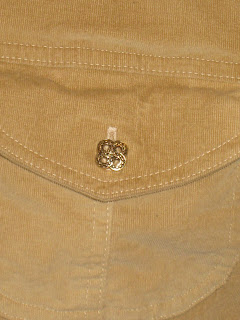 I had some fun buttons in stash.  Of course, they're predicting 98 this week which is very early for screaming hot temperatures, so I might not be wearing this until November.  Did I mention the new house will have shade?

There has been some work on the socks, but not much as some nights we just haven't had a spare minute, 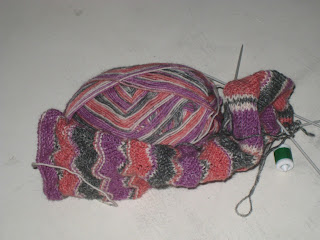 but I wound a hank of an older lace yarn to start a car project now that I'm back in outside sales and have already been stuck in traffic a few times.   It is nice to be working again and being able to leave to run errands for lunch and that sort of thing, and the service we're selling really is good, so I can stay if I need to.  I really like my boss and the commute won't be bad.  I'd like to do something else, but this will give me a chance to make some money, reconnect with old business contacts, and I think I can enjoy it while I'm there.  And I have a completely unnecessary sump pump to pay for....................
Save

In all of the interviews I've done, this was the first one for sales that was really done by someone who knew the job and knew outside sales, so THIS time it was as much about recruiting me as interviewing me, it's back in the IT field, which is basically where my sales experience has been, and I really like the people, so I'm excited.  It's amazing how much easier things are WITHOUT recruiters.  No boards, no fund-raising events and NO travel!!!!!!!!!!!!  And you guys will understand when I tell you that the thought, "I'll have somewhere to wear all my me-mades!" went through my mind last night.  If a job isn't just so one can afford yarn, then it's certainly a place to show off the yarny things one has made, right?

We have another showing today, so I'm tidying this morning.  Our realtor came by last night with an offer he'd received on the house that was so outlandish that he had brought a counter-offer form ready to go.  I know everyone tries to get the best deal they can, but when an offer is so low that it's guaranteed to be rejected by anyone NOT facing bankruptcy, what is the point?  A little time is actually a good thing now, though I'm really relieved we moved the open house from this weekend, I AM all for next weekend.  With a new job to learn, I'm okay if it takes a while to sell the house.  It gives me time to be able to save more money for a new house.  And furnish it..........

So, not much crafting, though I'm hoping for some later today after the showing.  The jacket is getting much closer to being done and now, of course, I want to cast on 50 new scarves for my new job as it's been a nippy 90+ degrees here this week.  Realism is not for knitters.  :)