Down to the Wire

Today is Andy's birthday and 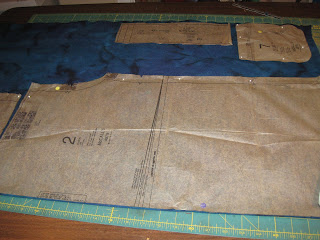 at least the shirt is in progress.  The pattern does say it's a 3 hour shirt, but the cruise of S.S. Minnow was a 3-hour-cruise (a three hour cruise....), and look how THAT turned out.  Still, we are having friends over tonight and I have sworn to stay away from the garden so I'll be mobile tonight, so spending the day working on the shirt could keep me out of trouble........

Speaking of trouble, I have rounded up the items on my list (plus one impulse buy: 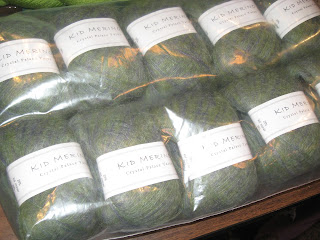 which isn't quite as insane as it looks because the shawls in Victorian Lace Today are notorious for using more yarn than stated, so this way I'm ready for her).  I obviously don't need it NOW, but now that I have tracked down this 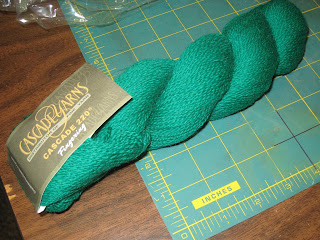 for the colorwork ornaments, and this 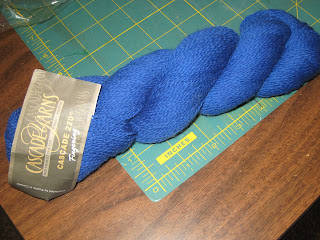 because my royal blue yarn is running low, it's just me and the stash for the next few years.  I did pick up some yarn for men's scarves because gifts are always the weak point, and I thought this 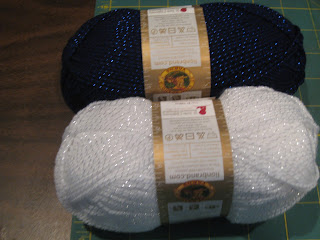 would be a nice option for Christmas ornaments, so I am set and ready to go for the three-year badge!  :)  It probably slightly defeats the purpose if one buys yarn before Cold Sheeping, but I was pretty pleased with myself.  I've been working on a list for the last 6 months, and did pretty well sticking to it.  The idea of buying yarn when it's really hot helped a lot.  Of course, it's only Day 2, so my optimism runneth over..........as do my yarn bins.  :)

New yarn coming into the house has been highly motivating, so there is now a finished sock, 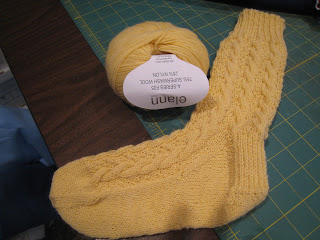 and I am making progress on the first of the wedding scarves: 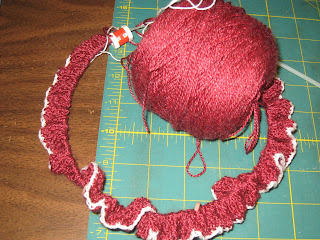 The scarf is knit sideways, so those are VERY long rows.  I have a full appreciation of this as I started out with metal-tipped needles which the silk-blend yarn slipped right off of, so this is the SECOND attempt AND I still had to work back almost an entire row to pick up a dropped stitch even on this one.  I either don't have bamboo needles in size 3 or they are busy on something else, but I do have this odd plastic needle that I've had forever and is actually one of my favorites.  It isn't quite as sticky as wood, but it's sticky enough to hold the stitches.  Two of these by the end of October???????