In order to get some bigger projects done this year, I'm aiming for 50 finished projects, rather than something truly crazy....like 116 or something, which even I am surprised I'm not attempting. So, finishing a second project for the year 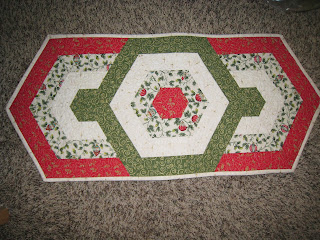 means I'm doing well so far.  It's not clothing, which was going to be my main focus this year, but I like it.  We've decided to cut back a bit on handmade gifts this year.  Even alternating years, it gets really stressful, and we do a lot of Christmas gifts for family members who don't even let us know they arrive--much less thank us for them.  So, we talked it over, and decided that not saying thank you--even by email or Facebook--can be freely interpreted as "I hate homemade gifts--please don't send me any more."  This is Andy's year for gifts, so that takes a lot of pressure off of him, and I've been happily sending table runners to friends, whom I know love them.  Win-win.

I am enjoying playing with table runner ideas, including 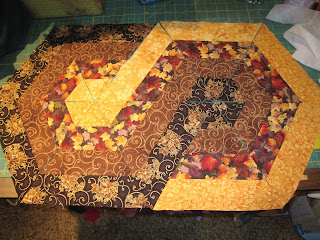 this, which requires only 10 triangles instead of 14.  It's going to be a smaller table runner, but it's a fun layout, and I like how it looks.  Plus, I was going to end up with 7 and 7 instead of the 6 and 8 to do the first layout because I didn't start cutting both stratas in the same direction, so the first layout wouldn't work anyway.  See how nicely that works out?

Thank heavens knitting is sometimes simple.  I have the first sleeve of Sitcom Chic finished up to where it will join the body, 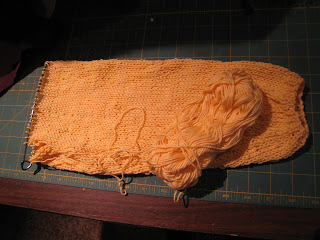 and now need to cast on the second one.  I might be able to wear this by spring!  I just walked 3 miles in cloudy 28-degree weather, so I'm ready to think about spring.........