After getting all the attention yesterday, Theo was in place early today and just begging for some tummy rubs 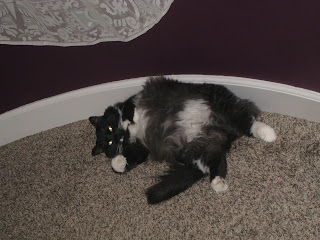 The napkins are trimmed, washed, and ironed, and three sets of six napkins each are ready for Monday's "Soup Night" salsa tasting 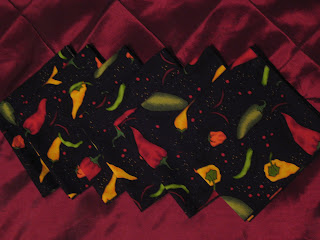 and I have used my "Martha" quotient for the month. Too bad, as Andy's birthday present clothes still aren't done.....

The scarf, however, being intended for no one in particular and having no deadline at all is getting lots of attention 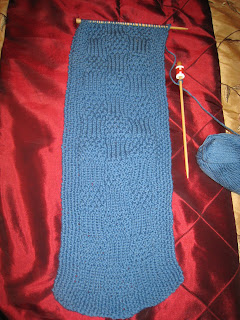 and may be done before the month is half over.

I'm using some yarn that I have had in my stash for several years, and after I used up the first skein, I went to the bag and pulled out this 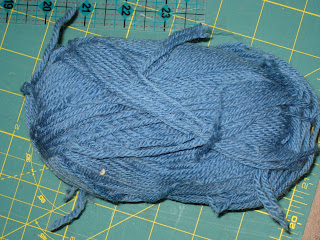 I have had yarn break in a few places because I wound it too tightly, but this wasn't tight. It's a Patons superwash & it has been discontinued for a while & maybe this is why it was discontinued. I noticed on the first skein that there were some places where strands had broken, but I have never seen anything this bad. What dreadful stuff!

So the big question is, do I get credit toward my total this year for crappy yarn that I throw away?