The Good News Is, I'm Learning A New Technique

So last night I decided there's self restraint and then there's torture, so I dug out the new yarn and gleefully cast on the new Kauni yarn for the Kauni cardigan. 24 hours later, I have 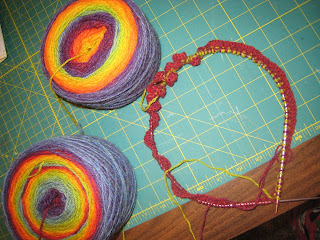 One and a half rows. I wouldn't even have that if I hadn't altered the pattern. To get a nice "framing" effect, I decided to do one round of the ribbing in a solid color before adding the second color for every-other stitch for the striped ribbing. Thank heavens--I can't even imagine trying to keep the cast on stitches from twisting while I'm trying to change yarn with every stitch.

I have done colorwork in the past, but as none of it has ever surfaced on the blog, it obviously isn't my favorite. I'm a bit of a lazy knitter, and the best way I know of to not have 3 trillion ends to weave in on a sweater is to stay away from colorwork. But every now and then the sheer beauty of it wins out. So, here I am. Halfway through the second row.

I thought it would be a neat trick to learn to knit with a color in each hand ala Elizabeth Zimmermann. After struggling on & off with this for 24 hours, I have come to the conclusion that while I might be right handed in regards to most things, my primary hand might be a bit...um...slow about some things. It just can't seem to understand that throwing the yarn incorrectly means a dropped stitch. A baseball? Sure--that it can throw. Yarn, which would be mighty helpful right about now? Not if the entire New York Yankees team were cheering it on. Admittedly, I was telling myself yesterday that I might want to savor this new project as it's my first new-yarn project in over a year. Don't think speed is going to be my problem.......

On another note, my little sidekick gets a bit bored with the life of an indoor kitty, so tonight we played one of his favorite games: 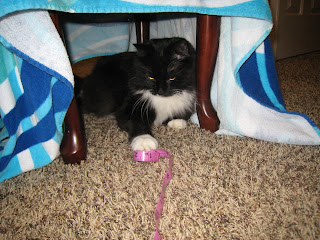 Being the sewing fan that he is, my tape measures are his favorite toy of all time. We bought him a few toys during his convalescence, but we needn't have bothered. Cats do not believe in commercialism.

P.S. And to answer a few questions, I really wish the yarn did come all prewound like that (why exactly doesn't yarn come like that, incidentally?), but mine arrived in these massive balls 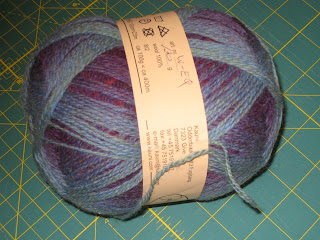 that take forever to wind--which is why you only saw 2 of the 4.

And the pattern for the moss scarf:
Using size 5 needles and a moderate laceweight yarn (440 yards per 50 grams), cast on an ODD number of stitches. Work a moss stitch bottom border for 6-8 rows. Keeping a 4 stitch moss stitch border as you work, on your first pattern row, K1 (YO, K2tog) across until the last 4 stitches, work pattern border. Work row 2 and all subsequent rows until you’ve reached the desired length. Work 6-8 rows of moss stitch across the top for a border and bind off.