If you ever get a wild idea to repair a bedspread or comforter, begin by taking a large, heavy object,
then beat yourself on the head repeatedly until the urge passes.

I am feeling better, but not 100% back to normal, so it seemed like a good day to tackle the bedspread problem.  After all, why ruin a perfectly good day?  I serged the remaining seams, then because I thought it best to reconstruct the thing in the same manner it had been put together (like a pillowcase around the batting), I sewed the edges together, and it was time to figure out how to attach the batting.  Luckily, I had a helper as usual. 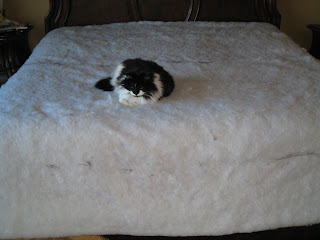 Interestingly enough, the batting is several inches too wide in every direction, which had been dealt with by simply folding the batting over.  Okay.  The problem was that the manufacturer also had some sort of spray adhesive that is much more durable and firm than quilter's basting spray--which was no help whatsoever.  So, I decided the biggest problem was going to be the bottom of the comforter, so 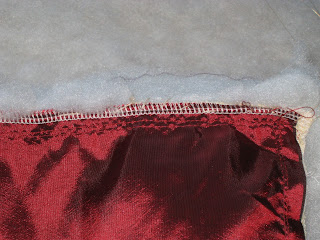 I did some really lousy hand-basting which probably won't hold the batting very well AT ALL but did help with the turning process. 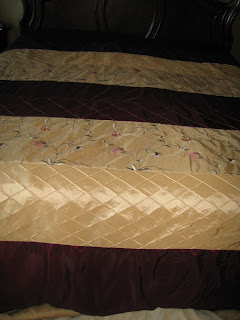 As did lots of swearing.  I did a bit of stitch-in-the-ditch at the sides to tack down the batting, but I'll be doing a bit more tacking by hand after this has some time to "hang" a little.  I'm a bit frustrated that it isn't "perfect," but then I remind myself that it's light-years better than the original construction, and it will lay on the bed just like it's supposed to even if I don't like everything about it.  And the best part is, I have 14 finished projects now!!!!  And the weird rash I have on my forearms from handling the batting will probably go away very soon................  Maybe I'm allergic to poor workmanship?

I was hoping to show off a second finished sock, but I didn't spend much time resting yesterday either, so... 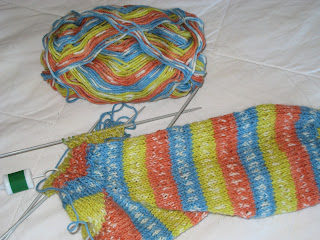 It isn't finished, but I have turned the heel and am several rows into the foot.  They really should be on time for my friend's birthday, which excites me as he's probably the only person whom I haven't been spectacularly late on at least one gift for, so it means a lot to me to preserve my reputation with the one person who really believes me to be on top of things.

And in other crafting news, the iris ostrich plume scarf was finished last weekend, but I missed it in my photos earlier, so this 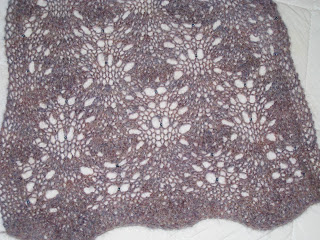 is what is should look like when it's all blocked.  There are beads, but they never show up in pictures.  I suppose I could solve the problem by using beads that contrast a great deal--like black--but I'm always afraid they'd look like bugs or dirt or something, and that's a lot of work to go through to have people continually try to pick the beads off the scarf for the rest of its life.

And in final crafting news, the February Project of the Month is.... 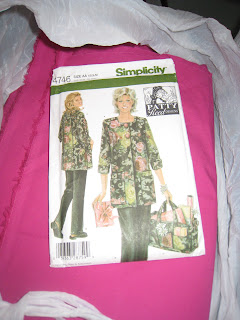 a crafting jacket with pockets!  The bag is cute too, so I might consider that as well, but I'm always wishing that I had pockets when I'm crafting as women's clothing so rarely has useful pockets, so I thought this would be a great project to have.  I'll be making it out of a stretchy poplin, which I haven't used before, but I'm hoping will wear reasonably well.  And the really interesting thing about this project is that I could work on it at the same time as the pink jacket I'm already working on, because they're the same exact color.  Can we tell that this is actually one of my best colors to wear?
Posted by Toni at 4:49 PM 1 comment: