So I did manage to finish up the second sock last night, but that left me with total yardage of 15,835.55--short of 16,000 yards but not by too much.  (And I'm not sure if I really thought this was going to work, but I did start this 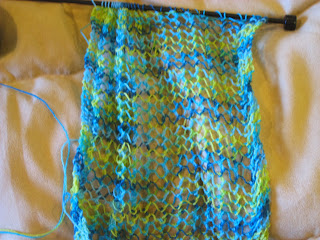 last night "just in case.")  It was still my second-best yardage year ever.  Not to mention, it allowed me to end the year with 117 projects--exactly the number I made last year.  How weird is that?

Now, on to 2012 and the "12 12s."  To jump-start the year, I'm leading another basket stashdash on Ravelry--this time back to the fill-the-basket and knit only from it, and this "dash" ends Valentine's day at midnight.  That's a month and a half, so I need a sweater and a half--or a sweater and half a shawl.  Or, 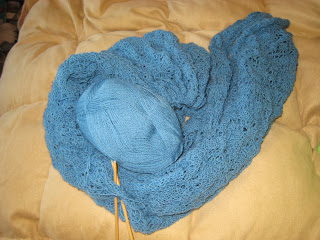 I could finish this poor, neglected Pi shawl so I can finally see how the darn thing looks, and have shawl/sweater #1 done without too much effort, then I can start on number two, 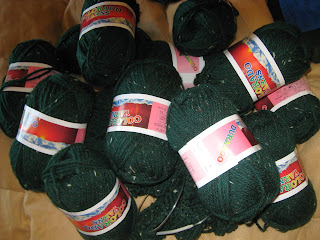 which will actually be a cabled vest for a good friend for Christmas.  You might remember this yarn from the earlier attempt at a vest which was so far off gauge that I could have skipped rope with the ribbing.  I'll be designing this one myself.  Also in my basket, I'm adding yarn for the 1 and a half washcloths I'll need to make: 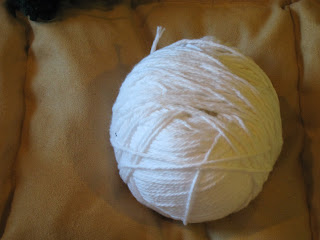 yarn for two hats (who makes half a hat?) 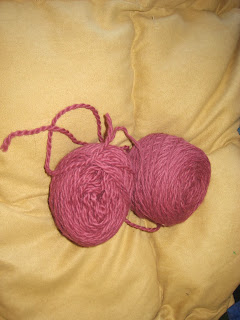 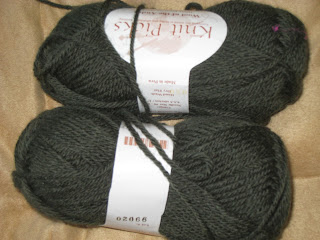 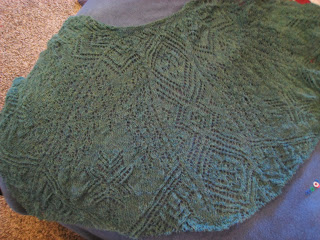 my dem fischer sin fru shawl is nearing it's 4th birthday--and without making much progress.  It isn't that I don't love the design--it's quite nice, really--but it really isn't ME.  Nor do I seem to like it well enough to finish it to give it as a gift.  I do love the yarn, so after several deep breaths--I have started frogging this monster.

Now the thing about old projects is that they might predate whatever methods or systems one has decided to use to track stash or stash progress.  Not only did this shawl involve a LOT of knitting--it involves a LOT of yarn.  How much yarn?  I don't know exactly.  I have at least one hank wound but not started 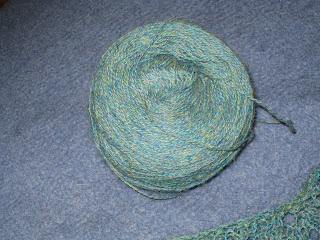 and I know there's at least one more hank in the lace yarn bin.  The thing is--none of it is on Ravelry.

It isn't that my stash ACTUALLY grew overnight--but it feels like it.  Wanting to face the worst, I decided to look it up on the spreadsheet I was using to keep track of stash before discovering Ravelry, and found I had 7.5 hanks listed.  7 and a half??????  Since I'm pretty sure Knitpicks has never sold half hanks, I am thinking this means I didn't add it to the spreadsheet until I was already using it.  The question is--does that mean I had already started this shawl?  Did I make something else?  Was I more than half a hank into this shawl?  Could there have been more than 8 hanks of this stuff at some point?  There's nothing in my project pictures on Ravelry, but there are a lot of earlier projects that have no picture and no record, so I guess I will have to finish frogging this thing, count how many individual hanks turn up, and check the laceweight bin to see what else is in there.  Just to be on the safe side, I have listed it as 5 hanks on my stash now.  The fact that there were at some point more than 7 is a bit unnerving, but at least it's a color I really like.  However, I think I'll put a stop to the rummaging around in the sewing room--if there's STILL more yarn not listed, I can happily live another year without knowing about it. Really, REALLY happily. 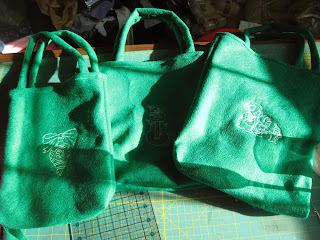 Sitting is still very hard on my back, so this actually took 3 whole days to do, but
I finished one gift bag on Friday and two more today, so I have now used up my first 1/2 yard of fabric for the year, and get to count 2 of these for the 12 bags on my list.  This should be a very interesting year.  2 down--142 to go!!!!