So I decided that even though I would be giving the stockings away & would rarely see them, I couldn't live with the errors. (I know--if you can't beat your neurosis, join them) So, I decided that since it was just an outline design, I would simply rip out the problematic design and do something else. Two hours later: 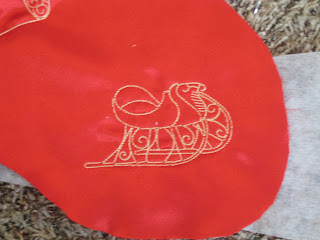 To be fair, that did indeed work, and there's no guarantee that I would have found something better to do with those two hours of my life, but I didn't want to do that twice. I am curious to try free-hand machine embroidery, but I try to keep "learning opportunities" away from things I want other people to see. It works better that way. So, I took a deep breath and: 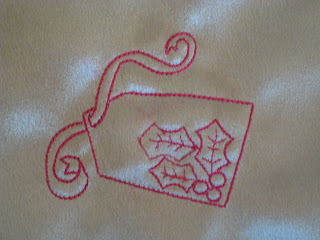 hand stitched the missing bits. It isn't perfect or even perfectly symmetrical, but neither is the vertical one which was part of the original design. This I can live with.

Before his vet appointment, Theo came in to help me and his poodle-do is now just looking like a serious arm hair problem: 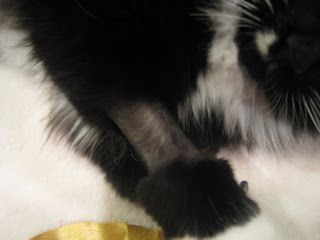 He got a festive new wrap for the holidays: 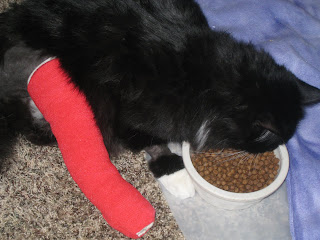 though the vet said we shouldn't be giving him as much freedom as we have in the last couple days. He suggested we keep Theo in a room without furniture. Sure--ours is right next to the room without walls. Is he kidding?????? They had to give Theo a little "kitty cocktail" just to get his bandage changed--I'd like to see them try to keep him quiet for the next 4 weeks. So, a very angry Theo spent the night in the cage again, and is now sulking in the back of Andy's closet now.

Whatever was in the kitty cocktail lasted for the rest of the afternoon--and being no dummy I took that opportunity to clip Theo's claws. Never pass up a gift drugged kitty. I think it caused a few hallucinations, because later he seemed positive that there was something hiding in his blankie. 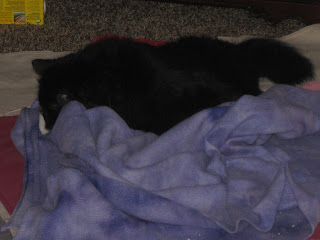 And, in totally unrelated news: IN 22 DAYS I WILL HAVE GONE ONE YEAR WITHOUT BUYING ANY NEW YARN!!!!!!!!