I spend most my days knitting right now.  This would be a more enjoyable state of affairs if it wasn't because my back is fried, but as weird as it sounds (considering I've spent most of the day laying flat), I think I'm finally on the mend.

What I have is called "sacroiliac joint dysfunction."  I'd provide a link to something helpful if I could, but while it is the first thing I've ever looked up on Web MD that didn't say death was likely or even eminent, I don't recognize anything they describe.  In layman's terms (and thank heavens I was referred to a specialist who speaks Layman fluently), this is the most common cause of back pain for women.  If you look at your pelvic bones (which is sort of impossible, I realize, so maybe visualizing the bones would be better) there's not really anything to hold them in place except muscle.  Because women often have children, our pelvic bones are designed to be more prone to movement.  It makes sense for childbirth, but doesn't always work for the rest of life.  They think that my problem probably dates back to my surgery 3 years ago, because it would be the best chance to have lost my core muscles, which would be the only thing holding my hips where they were supposed to be (which is contrary to the general female opinion that hips are SO wide that NOTHING could change them).  What happens is your pelvic bone (the big plate looking one that you can sort of feel) moves a bit, and your muscles very nicely compensate.  "Want to be here?  Fine!  We'll adjust accordingly," they cry.  Then it moves a bit more, and again--because they are just out to please--your muscles adjust again.  "More turning?  Even better!  We'll make it happen!"  This little routine goes on for a while, until either the turning is caught and stopped (smarter folks than me) or it goes all the way to the point where it can't go any farther, it has now made one leg shorter than the other, the little tiny gap that is supposed to be in your back has been squashed, and you take up fainting (the option I chose) and landing in the ER in crossword puzzle pjs.  For mild cases, there seems to be a belt that can hold your hip in place.  For severe cases, there are scary surgeries.  For people like me in the middle, there is physical therapy.

I landed back in physical therapy this fall because I got my hip twisted back out of place this summer, then with all the stuff with my father and work, I didn't get back to the doctor for help until October.  By then I had managed to irritate the daylights out of my back muscles by exercising them while I was all out of whack.  One of the things the therapist I saw this time has tried to do (besides teach me "moderation"--I love her optimism) is to change some of the exercises to blend them in to real life a bit more for me.  This all makes sense, of course, but at least some of the new exercises seem dependent on me actually practicing moderation.  This of the woman who WALKS so aggressively that I threw out my darn hip walking to my car in the PT office's parking lot.  I try.  I really, honestly try, but if I truly understood "moderation" I wouldn't have 46,000 yards of lace weight yarn in the house.  I think the change she made to one of the exercises would work for most of the population, but my back has been getting more and more sore, which is worrying since there is technically nothing wrong with my back.  It's not my back's fault that it hurts when it gets squashed by my wonky hip.  I think the rest of me would hurt if squashed as well.  But it seems to have reached the end of it's rope last week, when I had done all my other exercises then decided to try the hard one again.  OH MY.  If you haven't experienced it, a back that has finally reached it's limit can swell quite substantially for a spot that looks completely devoid of muscle in the first place.  I'd have almost be impressed if it hadn't hurt so much.

I've been icing my back as much as I can stand, have been resting for several days--and REALLY resting, not just the sort of "not-really-doing-anything-of-the-kind" resting one would expect from me, and the muscles have calmed down a great deal.  In the mean time, I have gone back to the versions of the exercises from last year--just the ones at the very beginning--and have been building up muscle strength slowly and gently.  While it may sound daft to announce that I'm making anything even remotely resembling progress while I'm spending days flat on my back with regular icing events, I really feel like I finally am rebuilding the muscle strength to stabilize my hip and put an end to this once and for all.  And, how could I possibly not be getting better with my get-well kitty in constant attendance? 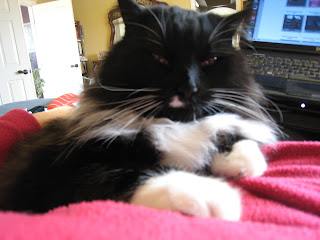 He makes it a bit hard to knit (or play on Ravelry, as you see in the picture), but he's very firm about REST.  He's ambivalent about knitting unless he gets to play with the yarn, but there's even been some amazing sock progress: 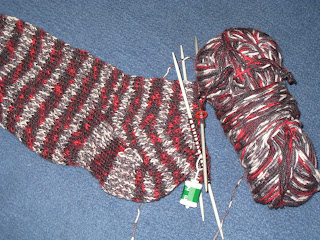 I had hoped to try pool walking again today, but Theo found my lack of "moderation" completely appalling: 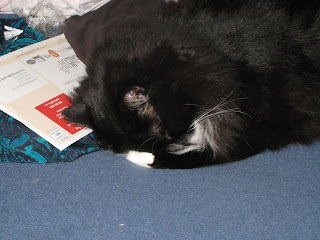 so I decided to wait a few days.  Who am I to question Get Well Kitty?