While There Has Been No Blogging,

there has been crafting.  The brioche scarf is almost done: 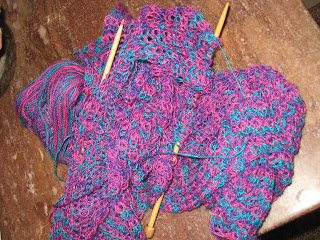 as is a 440-yard ball of lace weight yarn in one of my favorite color ways of all time.  The second sock is at the heel turning, and I'm beginning to think I'm going to make it to 20,000 yards of yarn for the year after all.  WHOO HOO!!!!

I've been resting and exercising mostly, but today I did venture into the sewing room for a bit.  As a break from movies, books, and audio books, I've been watching "Sewing With Nancy" videos online.  It's been nice, as I've gotten new ideas for sewing and ornaments for next year, though the unfortunate side effect is a "wish list" at Nancy's Notions of over $100.  I suppose if one is going to make a living having a show on PBS, one probably has to have a sideline income and one that you can integrate with your show is really clever, but thank heavens for the buying ban!

I decided to experiment with a technique she called a "pizza" because, while I didn't like the way hers looked, I thought it could be the basis for an interesting ornament or two, so I dug out a scrap of blue plush fabric left over from the winter pillows, 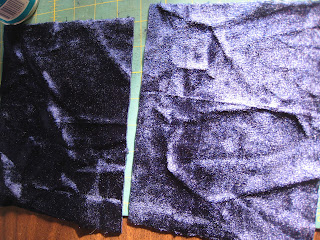 and my most well-traveled thread: 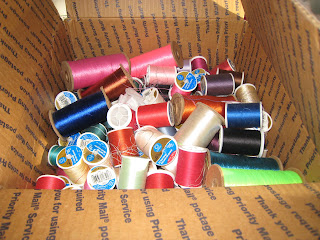 This began as my thread stash when I decided to take up sewing again about 8 years ago.  At the time, I thought I'd just do a few things around the house, so bought a little $100 sewing machine, picked up fabric, and stocked up on the Coats and Clark thread I'd used when I learned to sew as a child.  All fine and good until it turned out that I loved sewing!  This was a bigger shock to me than  anyone, because I despised it as a child.  I took sewing 4-H for a couple years, and hated almost every minute of it.  I quit and for years would not even sew a button back on or hem pants.  But I'd bought a house, just ended a 5-year relationship, and was looking for something new to do.  I wore out the poor little machine, and decided to look into a really nice machine.  It turns out that what I got first--the Husqvarna Scandinavia 400--as more of an expensive machine than a nice one, but luckily I figured this out quickly, and they let me trade it in on a better model--Jeeves.

When I bought the Husqvarna, I discovered 2 things:
1.  When faced with a machine that can do all sorts of things you don't know how to do, it's so intimidating that one might temporarily be stumped as to what to actually DO with all this new technology, and
2.  The fastest way to jam up a nice machine is to give it Coats and Clark thread.

Nothing against Coats and Clark.  I've been told that it's wound the opposite direction as threads in Europe, and since my machines are European, it created jams, and that could very well be the case.  The "jamming" part certainly was.  A friend of mine in New Jersey had her mother's old sewing machine, so I packed up all my C&C thread and sent it to her.  This worked great until she also decided to upgrade her machine, at which time she couldn't use it either but I had acquired a serger and the Bernina mechanical machine, so she sent it all back plus what she had added to it.  So, I have a big box of inexpensive thread to play with.  SCORE!

The "pizza" technique is basically to cover a piece of fabric with thread, trim, scrap material, or whatever takes your fancy, then cover it with water soluble stabilizer: 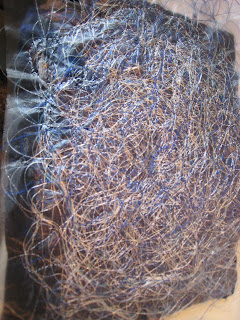 and stitch over it with transparent thread.   Nancy used a roller foot, which I thought I had, but either can't find or don't have.  Mine wasn't nearly as lumpy as hers, so at first I just used a regular foot and a zig-zag, and all my little almost-empty bobbins: 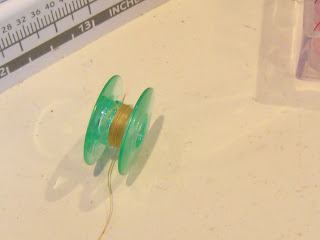 I'm still missing the majority of my empty bobbin stash after the remodel, so it was nice to free up some bobbins to use until I finish unpacking.

Zig-zagging was fine, but a bit dull, 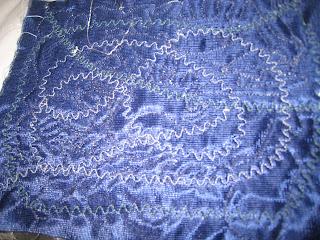 not to mention leaving big gaps that would take me forever to fill in, so I decided I might as well learn some more new things, so I dug out my quilting kit: 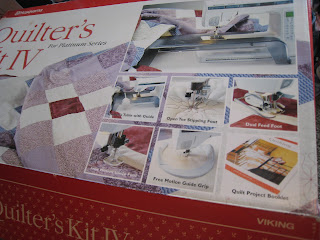 which I got on a promotion where the kit was cheaper than buying the walking foot separately, but I've never used the other feet.  In one of the episodes, Nancy had talked about the uses of "stippling," so after figuring which foot one "stipples" with, 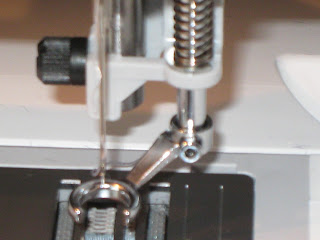 as well as figuring out how to attach it to the machine, and set about becoming the world's worst "stippler:" 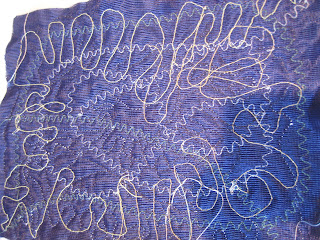 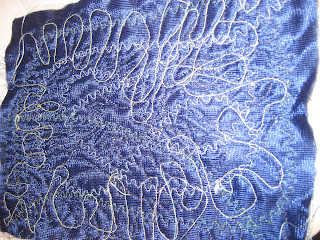 Thank heavens I didn't try THIS on a quilt yet.  It did work nicely to fill in any gaps I thought I might have missed, so tonight it was time for the big test!  A soak in the sink to wash away the stabilizer, and: 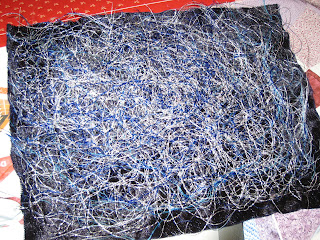 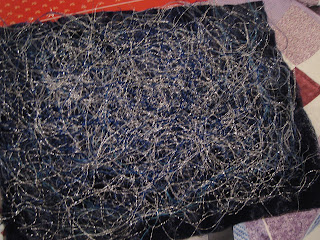 The actual version is more of a cross between the two pictures, but I actually sort of like it.  I'll use this as a basis for an ornament, with perhaps some blue and silver trim.  I have a second piece to do, which might be the back of this one if it turns out remotely similar, or I might have two sort of long, skinny ornaments.  We'll see.  If nothing else, I got to spend some time creating a HUGE thread snarl on purpose, so that was incredibly exciting.  As a knitter, that's a difficult concept to grasp.  Still, a fun new thing to learn.