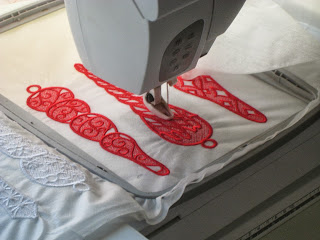 Even if it is with Jeeves's help.  Red is pretty much the only machine embroidery thread I have left in any quantity, so there are three new red icicle ornaments.  Theoretically, I could have done 6 more and gotten caught up, but my back is still pretty fragile after jury duty, and these were the limits of my sewing room time.  It's healing, but obviously I won't be pushing it for a while.  It is making progress, and they still think I'll be able to do most things.........just maybe not race-walking or sitting for long periods, especially not on hard benches.

While Jeeves was working, I dug out the ornament shapes I'd cut out earlier, 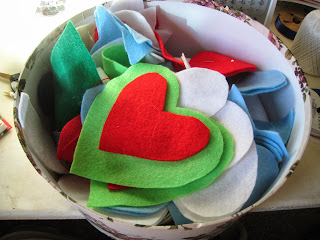 which has been sort of counter-productive.  The whole idea of setting a goal to do a crazy number of ornaments was to give myself the freedom to try new things.  For unknown reasons, cutting out a stack of shapes all at once has made me less inclined to use any of them for experimental ideas.  I haven't wanted to waste the shapes on ideas I wasn't sure about.  Well that's silly, so... 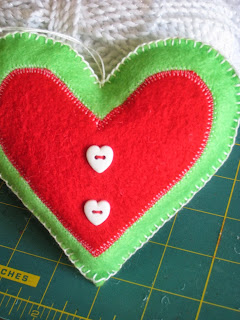 yesterday I made a felt heart ornament.  On this one I decorated both sides, and while it isn't my favorite ornament, it is an ornament.  When one is behind, that is all that matters.

Then it was time for the heating pad, so 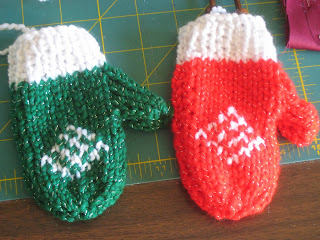 I made more mitten ornaments.  I haven't really liked any previous ornaments made with the green yarn, but I love this mitten.  And just when I thought I was getting a little sick of them.

It won't be a problem this year, but I have discovered that my planning for the ornament project had a fundamental snag: 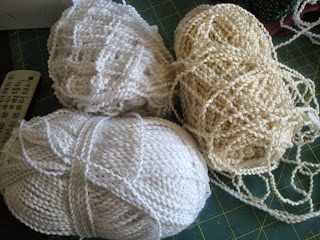 I seem to have purchased equal amounts of white and off-white as the colors for which I'm using them as accents.  I don't think I'll run into a problem this year--at least not with the bright white--but I do intend to make a few ornaments next year, and I will certainly run out of these before I use up the other colors.  Oops. 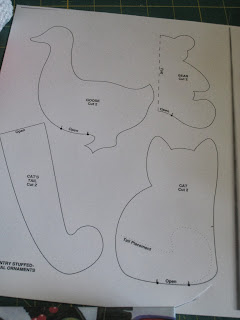