We spent the holidays with family in sunny California, and at the last minute I decided to cast on an easy-to-do scarf to take with me instead of Andy's sweater, so I have this 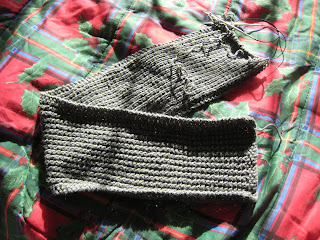 to show for my absence.  I'm doing a simple stitch--knit one row, then *K1, P1* across for the next row--which I really like because it makes an interesting reversible scarf.  I added a seed stitch border on the end & each side (3 stitches on each side) but the darn thing still wants to roll. I can't decide whether to be really annoyed with it or admire it's determination, but I'm hoping some severe blocking will help.

I took the lace scarf down as well, but there was one moment on the plane on Tuesday when I had the most horrifying thought:

I could run out of knitting

OK, I think this on every trip--which prompted me to take two entire sweaters along on my honeymoon even--but this time I was traveling and only had two scarves with me.  What would I do if I ran out of yarn?  I couldn't buy more--I'm cold sheeping!  The knitterly horror!!!!!!!

Of course, what I hadn't counted on is three children--ages 6, 4, and 2--who kept Aunt Toni so busy every day that I didn't get either scarf done.  (Those of you with small children may now scoff at my naivete)  So, today I am resting and trying to kick this dratted cold, sucking up to two lonely and angry kitties, and perhaps finishing one of those scarves.....................