I am still not willing to say there was really anything good about 7 weeks of bronchitis, but I will concede that it gave me my first day totally free of any back pain in years.  By Christmas day, the sharp, grabbing pains that are the biggest danger to me had been gone for a few weeks, and the constant aching on days it snowed had finally stopped.  But there was a chronic ache in the small of my back that never stopped or let up, and I thought I might just have to live with.  It was still the farthest I'd gotten, but it was always there.  But after the first week or so of bronchitis, it had finally let up.  And, while the bronchitis was completely and utterly miserable, my back didn't lose ground or stiffen up, which my therapist was quite pleased to see. I was pleased too, and would have been pretty giddy about the ache going away if I hadn't still been sick and stuck mostly in bed anyway.  It's wonderful to make progress, but if you still don't feel well, it's harder to appreciate how big of a difference it will be.

Last Saturday we drove to a funeral that was about an hour and 20 minutes away.  I could tell the exact point where my back had reached its threshold, and the next day I was back in bed, but more due to the bronchitis getting worse from the adventure than my back.  It was sore, but it was the first time I had pushed it too hard without being completely debilitated the next day.  I won't be trying it again for a while because pain is the most dangerous thing for my recovery right now, but even less-bad is progress.

Last Monday, I woke up pain free and able to breathe normally again.  I can't even TELL you how great that felt........right until I burned the daylights out of my hands.  And this is a very fragile recovery, because by Thursday the pain in my hands had wound my back up again to the point of misery, and I had to use the meds to stop it.  So I know there is still a long, long, LONG way to go, but until this little glimpse, it was entirely possible that I would never, ever be pain free again.  I thought I had come to terms with that, and I was even reasonably okay with the chronic ache once the snow-related pain eased up on me because the possibility that THAT was going to be with me the rest of my life was dreadful.  It turns out there are lots of things about pain I didn't know.  An intense pain that will let up if one lays still is much less overwhelming than a less intense ache that just doesn't let up.  Some pain is more dangerous than other types.  Pain that doesn't move is probably a structural issue.  And pain changes your life.

Today, for the first time in probably 2 1/2 years, I woke up, got dressed, and made the bed: 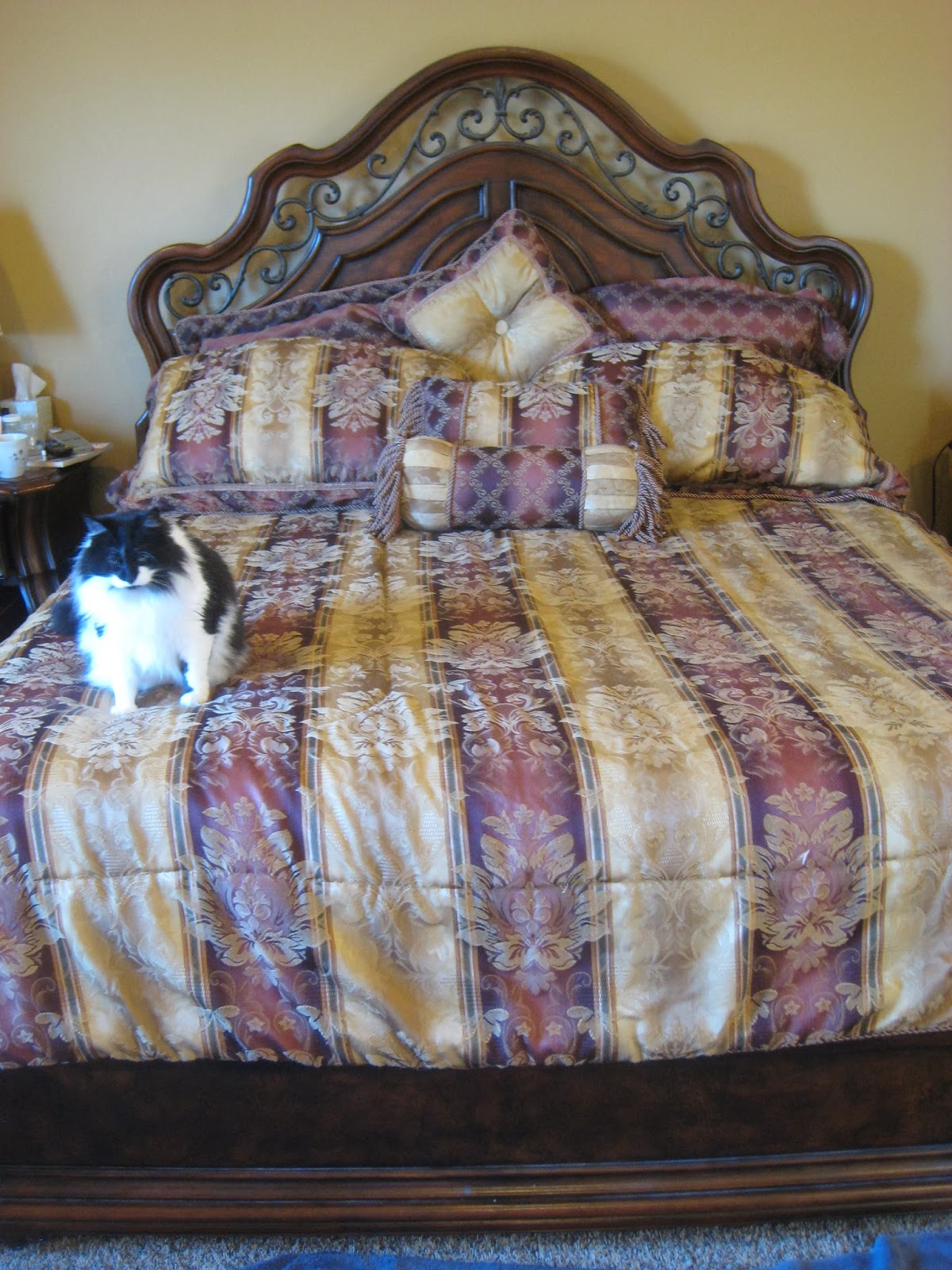 It shocked Calisto so much, she had to jump up and explore this new phenomenon.  I remake it every time I wash the sheets, but I didn't bother to make it in the mornings because even on my best days, I've had to rest at some point.  If I make it until evening, this will be my first day completely out of bed in years.  I find that astounding.  As a child, when I got in trouble I had to sit in the big green chair because sitting still was never my strong suit, and sending me to my room only resulted in jumping on the bed.  I have always gotten edgy being cooped up or having to sit still for too long, but this has so dominated my life that it has just become "normal" to need rest, and I have grown so used to this that if I got to do something fun or active but still needed to rest to recover, it was a really good day.  If I got to go do something with friends and it meant spending the entire next day in bed because I hurt, it was still terrific because there have been FAR more times when I couldn't go to things because I hurt too much.  So, I am hoping that I am restarting my life today.

Saturday my hands had finally stopped hurting enough for me to wear loose gloves and I was able to go for a walk.  It was cold and raining and I came back soaked, but it was wonderful because it was the farthest I had been able to walk in quite a while, and Boise gets such a bad inversion that in the 7 weeks of bronchitis, I could barely breathe at all outside--much less walk.  Today, however, 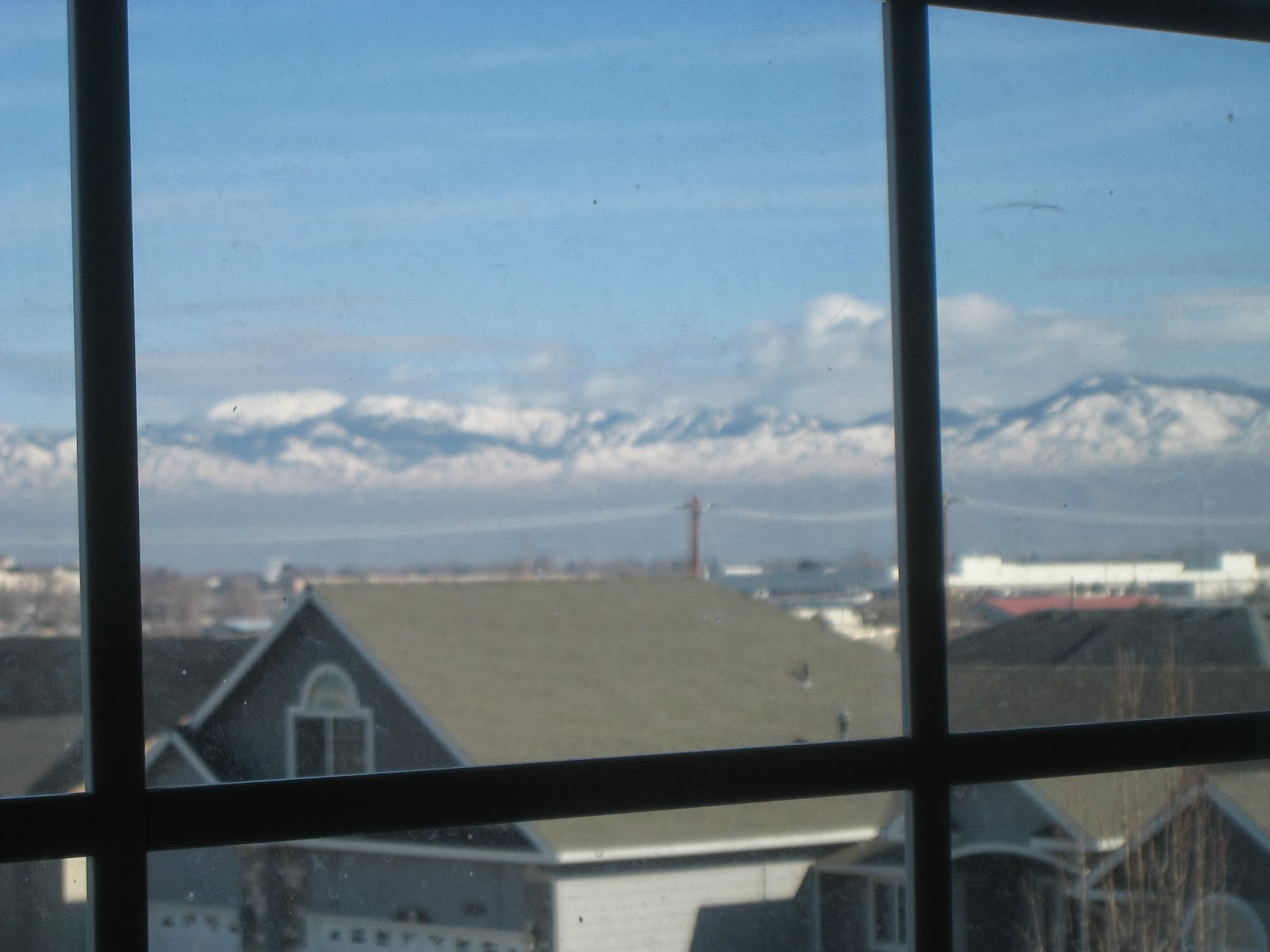 is BEAUTIFUL.  We have sun, the sky is clear, and I have been out walking for an hour and 15 minutes.  My back might have held up for more, but my boots were rubbing on my heels and I wanted to stop before the blisters broke.  I walked down to our library, which I used to do quite a bit but has been well out of my capability for a long time.  Even better--I "let go of the edge."  Because it has so often hurt, my walks have usually been laps around the subdivision so I wasn't far away if it hurt.  We have two loops--one just around the houses, and a slightly longer one that takes in the school.  I did start out with the larger loop because it will probably be a good idea for some time yet to do a "check," but to get to the library and back is 3.2 miles.  With or without pain, and I didn't have my phone.  I hadn't intended to do so, but the last 6 months of therapy have been partly about getting both my muscles and my brain to stop expecting pain--which would have been a lot easier if there hadn't been so much pain involved IN the therapy and in my attempts to walk during this period.  But it was so pretty and it felt so good and while I know it would  have been safer to start with a shorter distance, I wanted to keep going and that is what I would do in a life not dominated by pain.  So I did, and it felt wonderful.  The entire walk might even have been 3.5 miles total, which is a distance I would have considered decent exercise even before the back problems, so it was a real walk and not a concession to my back.  And now I am NOT laying down to rest.  Admittedly, my hands are still REALLY painful and woke me up at 2:00 AM and it was only a pain reliever and valium that let me get back to sleep, so I still am limited on things I can do for the rest of the day by that, but I'll find something and it will NOT be in our bedroom or lying down.....I hope!