Hope everyone had a good Christmas. I can't believe it's almost been a month! 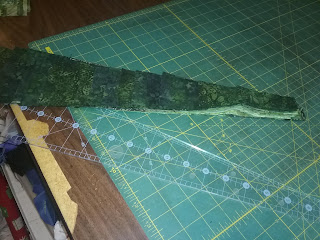 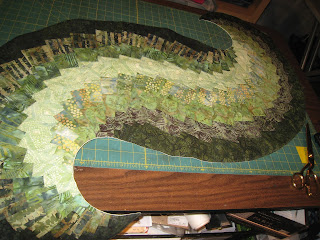 and was able to get it finished!  Really, this is the best pattern EVER.  Here's a better picture of the one in purple for my friend, 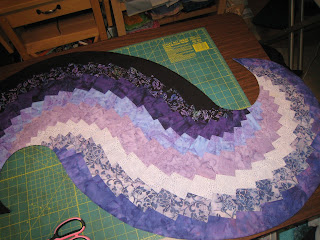 which she loves. There was a time when I thought I would make quilts or shawls for each friend as they turned 50, but then I remembered how many really good friends I have.  So, it's table-runners! 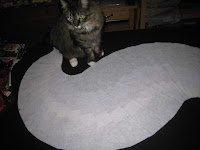 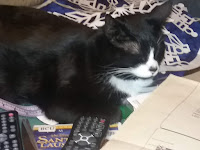 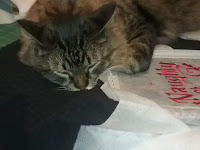 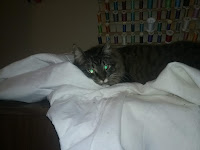 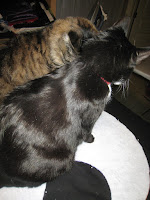 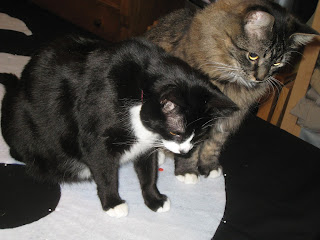 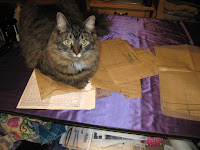 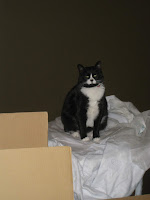 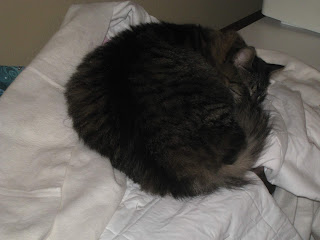 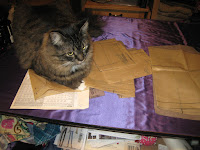 and over the holidays we've made pajamas for both Andy and I, some new towels, 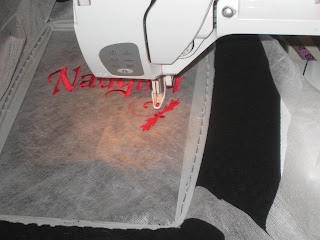 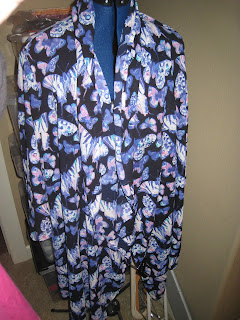 a new chiffon jacket for me.  Part of the reason for this sewing frenzy is: 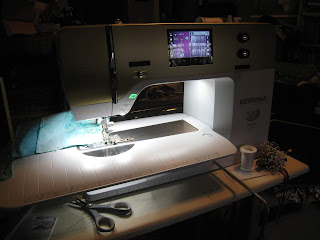 I finally got a new sewing machine!  I've been researching this for a few years, actually, and since it's a 4-hour round-trip to get my existing machine fixed but the repairs aren't lasting even a year, I decided it was finally time and took advantage of a big holiday promo the first week of December.  The embroidery module is still on order, but I have so much to learn for just sewing that it's okay.

The new machine has a very big throat area for quilting, which was also a driving factor.  It also has dual-feed, which was amazing on the chiffon jacket.  Now I'm using it on a new quilt for some friends buying their first house, 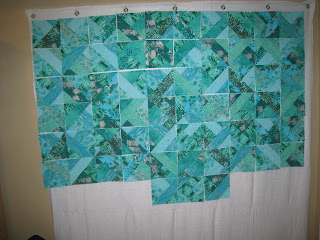 and I'm trying to do a "scrappy" quilt.  I'm a very symmetrical/orderly sort of person, so I am struggling a bit with "scrappy."  I might need to rearrange things a bit, because it doesn't feel very balanced, and there's a whole menu of great quilting stitches on the new machine, so I think I'll be doing some decorative quilting in white on--maybe with a white border.  It's 3 small jellyrolls, so I might end up with white on the binding as well if I can't find a good solid fabric to match/accent this, but I think it's going to be a fun project.  I'm already loving the dual-feed with the quilting foot, so it's moving along very quickly.  Maybe I can actually finish a few big projects in 2019?

There comes a time when innocent people completely forget the horrors of moving, and in a moment of insanity--possibly brought on by noise, too many neighborhood rentals, high winds, and traffic congestion--decide to pack up everything they own and pay twice the estimate to large men who will scratch every stick of furniture and crush well-marked fragile boxes as they move it across town, where the gullible innocents will be so traumatized by the process that they will be unable to send out the annual holiday letter….

When I say that we moved in 2017, between cleaning and prepping the old house, selling it, finding a new house, all the negotiations and unpacking, it really does seem it’s what we did with the entire year.  Probably because it’s mostly true.  Toward the end of the year I was finally able, after 5 years of physical therapy, to return to outside sales, and I now sell business signs for an old client of mine.  We had to say goodbye to our oldest cat shorty after we moved, so adopted two kittens to keep our remaining cat company, but lost one of them to disease two months later, so we found another kitten right before Christmas.  There were some adjustments, but now the three of them get along and have united forces to keep the Christmas trees free of ornaments and tree skirts and to have wild dashes around the house at 3:00 AM.

After 10 years of telecommuting, Andy changed jobs this year and now works for a local company which is close enough to our house for him to run to work once each week.  He’s enjoying having an office again, and it turns out it IS easier to write software without kitty assistants crawling all over the keyboard.  Who would have guessed?

We are loving the new house and neighborhood, and we had a fun summer of “weed or plant?” in the yard.  We are close enough to the water table to not have voles, which wasn’t the main reason we moved, but it is a nice perk, though celebrating by planting 100+ bulbs might have been a bit overboard.  The previous owners were flower-lovers as well, so there was something blooming almost constantly from spring onwards.  Sometimes we even knew what they were.  We’re close enough to walk to the local bike path and nature walk, and have really enjoyed exploring our new surroundings, and the neighborhood is very much a community.  Two different neighbors brought us cookies when we first moved in, which we thought only happened in movies and urban legends.  The backyard is everything we were hoping for, and we spend lots of time out enjoying the birds and dragonflies and trying to figure out why our lawn is peppered with volunteer carrots.

There was much less time for sewing and woodworking during the move as both of them generate MESS, which is problematic when someone can call at any time to come view the house, but with the move Andy gained a window in the garage for natural light and I gained more space for the sewing room.  Much of this year was spent trying to unpack and organize, but we’re getting back into the swing of things and have large lists of new projects to make for the house.

This year we had to say goodbye to some very special people: Andy’s brother, Mike, and one of our closest friends and (briefly) neighbor, Ron.  It turns out the price one pays for having great people in one’s life is how hard they are to lose, but fond memories help.

As we go into our second Christmas in the new house, we’re settling in, enjoying lots of holiday parties, and learning that very few things in life are truly kitten-proof, and hoping you’re enjoying a wonderful holiday season.


This year I have learned….

The 50th birthday gift for my friend was finished yesterday! 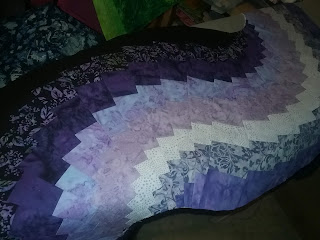 and I couldn't be happier.  I bought a set of 8 fat quarters from Craft Warehouse to make this, then ended up not liking one of the colors because it was just too jarring, so the ginormous fabric stash came to my rescue!  Yes, I did have other purple fat quarters on hand.  I don't think I'm learning good stash lessons here.

I was sewing the next strata together while working on the first one to be ahead on big gifts, so I got the 4 strata done and ironed and ready to cut... 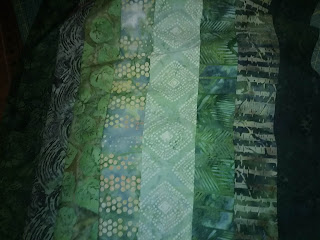 and totally messed up the cutting--to the point that it can't be a spicy spiral runner.  Oh yeah--it's in the Project Timeout bin right now and I am sulking with my knitting.  Sure, I make mistakes knitting as well, but frogging fixes almost everything......Too bad life isn't like that.
Posted by Toni at 6:18 PM 3 comments: