Never underestimate the determination of a type-A knitter: 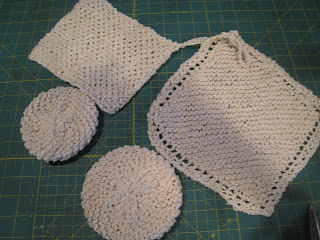 2 washcloths and two tribbles later, I have now used up a whole CONE of dishcloth cotton yarn, and have one more entry on my "all used up" tab on Ravelry.

Now, on a new yardage-burning high, I've become a bit of a knitting schizophrenic.  What can I work on that will increase my yardage fastest?  The epaulet sweater is in worsted on size 8 needles, 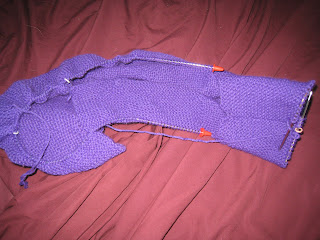 so it got some attention yesterday.  I decided to disregard the pattern and knit the sleeves in the round, which leaves a visible line on the sleeves as I'm working in garter stitch and there's a clear line where I now switch from knit to purl, but I'm not sure I could do a seam that would be any less noticeable, so I can live with it.  I think I've gotten past the "interesting shaping" part that I was curious about and am now in the "boring all-garter-stitch" part, so I worked on it as long as I could stand it, then 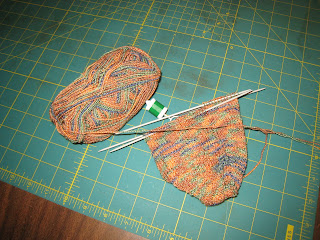 cast on a new pair of toe-up socks.  It's one of the last skeins of Knit Picks Dancing, which I don't particularly care for, but it is non-splitty enough for me to read or do other things while working on these, so they are zipping along. They were just started yesterday, and the foot is probably 40% done already.  The nice thing about my new obsession is that socks were a bit depressing last year because I needed TWO of them to hit my goal.  Now that I'm yardage-crazed, I get a little yarn-obsession FIX each time I finish a single sock--or at least I do if I have the sense to use smaller skeins instead of the big two-sock skeins that I actually prefer.  I'm not obsessed enough to pursue any yarn that would force me to splice or weave in ends on socks--there are limits even for ME.  Which is REALLY saying something........................