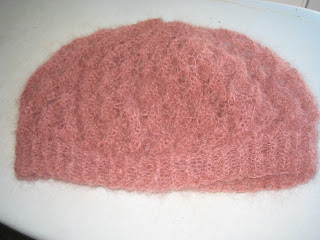 really freakin' huge.  And did I check gauge?  Of course not, because I am a slow, slow learner.  It still works as a hat, but it's now a beret rather than the tam I was hoping for.  As it's mohair, it's easier to change expectations than change the hat, but I think in future hats, I will be casting on far fewer stitches for the band.

My back continues to improve, though instead of leaving Friday's physical therapy session full of spunk and energy like I did on Monday, I was so exhausted that I actually came home and fell asleep--then slept another 10 hours that night, and might have made it to 12 if Theo had thought that appropriate.  I have been resting a lot this weekend, which has resulted in 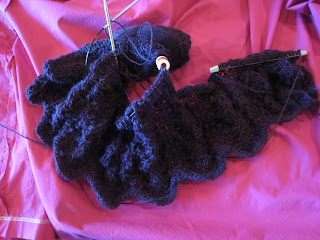 the long-promised new sweater finally being cast on and currently resembles some sort of purple ramen-noodley mess that will hopefully be straightened out with some very severe blocking, and because I seem to love frustration, 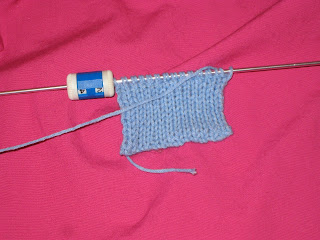 this is what I think is now my third or 4th attempt at the free bow tie pattern on Knit Picks (which I do NOT recommend, by the way).  The pattern suggests casting on 40 stitches and knitting them in double knitting, but I don't think there is a needle small enough to get a gauge with fingering yarn that would NOT ensure that the wearer could lift off in strong winds.  I tried 30 stitches, and finally tracked down a free sewing pattern for a non-mutant bow tie, and found I can maybe make the pattern work with 26 stitches and basically working from the outline and deleting the Knit Picks pattern entirely from my computer.

Probably because of my natural tendency to get insane ideas when frustrated, I have decided to try knitting a mitten ornament for each niece and nephew this year.  Thus today's mitten output: 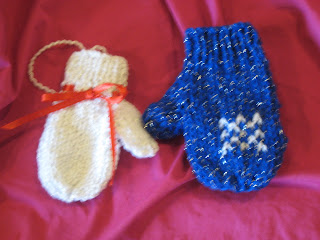 As we have 8, this could be doable--though I admit I have been giving them away as gifts faster than I have been making them.  These were new ideas that I had.  Theoretically, the blue one (which somehow ended up with 2 extra stitches) has a snowflake on it (which it doesn't really resemble) and I got the eyelet and ribbon idea for the white one without getting the accompanying idea to figure out whether I needed an odd or even number of eyelets for the ribbon to work as intended.

After so much unsatisfactory knitting, I felt the need of a quiet, easy project--sort of the knitting project equivalent of a hug, so I have started another toe-up sock: 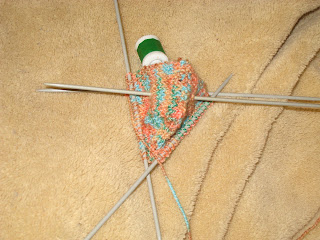 Some days monotonous knitting is JUST what I need.