On a Rainy Sunday

Mother Nature was a week off, because we got our usual Easter weather (cold, rain, wind) yesterday.  While Theo chose to spend the day snoozing in a pillow fort, 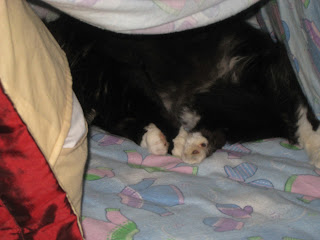 I spent most of the day in the sewing room.  I was inspired by the idea of a Victorian Christmas, so 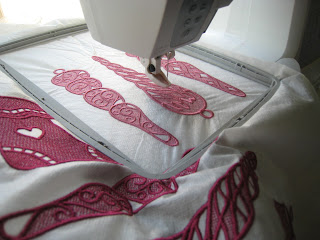 more pink ornaments!  And even more: 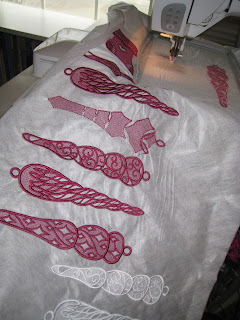 As you can see, 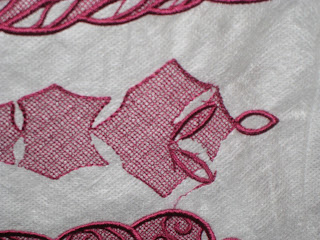 there was a problem with one of the icicles.  Some of you might recognize this as the sort of thing that lead to the long battle with the jerks at Holland's Sew Shoppe.  To anyone who ISN'T a complete jackass of a repair guy who blames everything on user error, this was a mid-design jump, which means the embroidery card is going bad.  I think my machine is one of the last to use these: 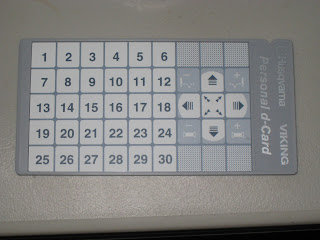 which is how I transfer designs from the computer to the machine.  So far, it's just one design, so it might mean there's a defect where it wrote this design--in this case, number 11.  So I can still use it, but just won't embroider anything on that number.  I'm hoping this is not the new card I bought 2 years ago, but I can't be sure.  I know it isn't the one that had problems before.  I don't know what they are now, as Husqvarna is discontinuing all stuff like this to force their customers to buy new machines (which will work in my case, but it sure as heck isn't going to be a Husqvarna/Viking next time), but they used to be $159 according to the sticker on the case.  The accessories used to be a pretty good source of income for the company, so it seems silly to discontinue it all, but I've ceased to wonder about the things Husqvarna does.  I've had Jeeves 7 years now, have had to buy 2 replacement cards so far, and if I can get 2-3 years out of new cards, I think I can get him through another 5 years.  At that point, we'll be done paying child support (and all the accompanying legal fees) and our personal allowances can go up, so I will probably look for a replacement machine then.  For the amount I paid, I had really expected better, but at least I didn't buy one of their current machines, which are FAR more than what I paid and have even more problems.  Maybe I can even get another 7 years out of Jeeves with the new dealer?  We'll see.

I made more progress on the jacket, and will probably get it finished this week.  I might have finished it yesterday, but I got distracted by this: 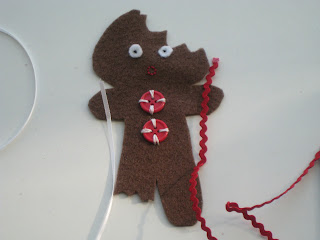 He's an adorable little felt ornament which is a free pattern you can find here.  The things we can add to the ever-growing list of things I don't have on hand are small white rickrack and black embroidery floss.  Instead of the floss I used some leftover black lace yarn, but I can't decide whether to use the small red rickrack or go with white ribbon.  What do you think?  I think the rickrack looks more frosting-like, but I wish it were in white.  AFTER starting this in the dark brown, I did find some tan felt 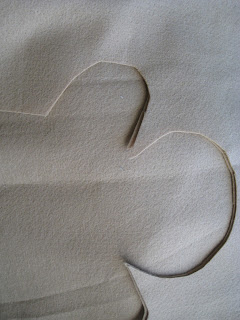 leftover from the puppet kits, which I think will help a great deal--especially since you can't see his mouth on the dark one.  Originally, I didn't think I had brown felt at all, but I had forgotten about the puppets.  Is anyone else surprised by the number of things I'm finding out that I don't have?  Really, I didn't even think to do an inventory or list or anything before starting on the one-year buying ban because I was sure that I owned just about everything anyone could think of.  I'm not sure I'm happy to be proved wrong, because I still have a lot of stuff--just not always the right stuff.  Insanely, I'm even thinking about doing another year on a spending ban after this one.  Of course, I'm saying this with more than 6 and a half months left to go, but there have been SO many times already when I found myself wanting to purchase anything just to buy something new, and this forces me to limit my purchasing automatically to things I want for an entire year, which eliminates impulse spending.  Of course, by November 1, I might think all of this is completely daft and be thankful the whole ridiculous experiment is over, but the way the "to be purchased" list is growing, I won't have any allowance left on November 2 anyway.............