The last one has finally defeated Theo, though if you notice how long his leg looks 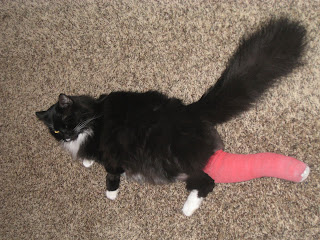 he has managed to slide it down his leg about an inch and a half now.

The horrible pink cherry-flavored antibiotics ended this morning, which is just as well as the bandaids ran out today too: We thought we were through a few days ago as the original prescription said to give the blasted things for 10 days. Last week I had to get a refill because of all the medication that had been splattered on the walls, carpet, clothing, sheets, and floor, and when I double-checked that bottle it said to give it for 14 days. When I called the clinic, they couldn't reach the vet so they said to go ahead with the 14 days. Easy for them to say. Theo has been a great sport about all of this, but he finally really started to struggle against this one. I don't blame him. The doses were more than three times anything I'd given him previously and I personally feel about the same way about cherry-flavored syrups, though I don't usually spit them all over the walls..

He was thrilled to recieve a get-well card of his very own: 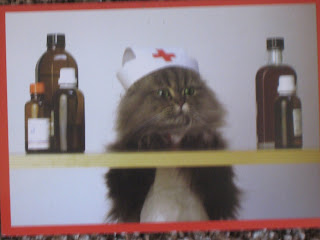 and seems to be enjoying all the sympathy. Theo's devotion to me has increased so drastically through this that it's a bit overwhelming. I was always his favorite person, but now I am rarely allowed out of his sight. Do cats suffer from Stockholm Syndrome?

The pink blanket is progressing nicely: 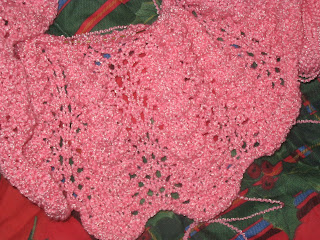 though the yarn skein had a bit of an issue: 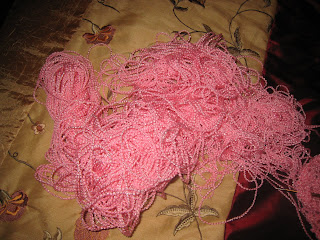 I admit, I don't work with acrylics that often and wouldn't call myself a yarn expert by any stretch of the imagination, but I hadn't ever seen a skein explode before. I think I have figured out how many rows I need to do each week to finish this in time for my neice's birthday, though if it keeps exploding, all bets are off.