Yesterday I finished the neutral chemo cap and a secret surprise project, and today I came really, really close to finishing one of these: 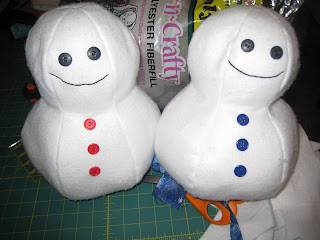 which are snowmen-to-be, just in case it isn't obvious.  They are from this pattern: 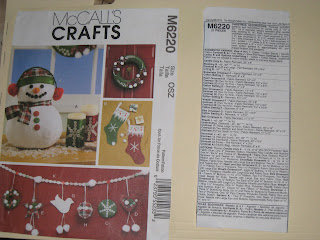 and Theo was so excited to be sewing again that he didn't even let me get the pattern pieces cut out before "helping." 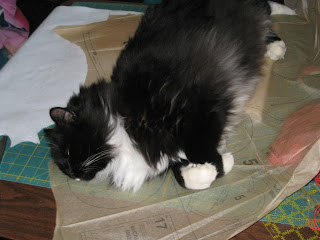 I might have actually finished at least one of them today had the unthinkable happened:  I didn't have all the materials the pattern called for.  Now those of you who have seen my sewing room realize how amazing this is.  I have stashes of beads, felt, zippers, buttons, elastic, braid, thread--all the things that I need to complete projects in one sitting.  They aren't HUGE stashes (unlike, you know, the yarn one), but they do usually meet the needs of any project I attempt.  Until now, of course. 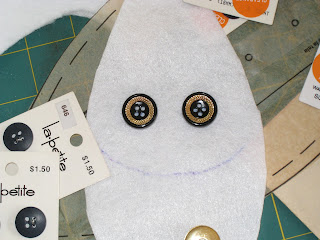 is as close as I could come, which would be great if I were making a frog or puppet or some sort of drug-addled snow monster, but who wants a decoration staring at them like THAT all day?  So, my snowmen have navy blue eyes.  I'm sure coal comes in colors by now, right?

Then, instead of a button mouth, I was going to hand embroider a quick little mouth.  Except that I don't have any black embroidery thread.  None.  So, I practiced satin stitching with tapering until I thought I had it close enough--and snowmen probably have crooked smiles anyway, right?

Notice anything else missing yet?  The pattern calls for orange felt for the carrot nose--which I would have sworn that I had, but don't, nor do I have any orange fabric without prints--which again, I was sure I had.  I'm thinking they can either live without noses or if I just get one square of orange craft felt that it doesn't really qualify as "fabric" exactly.  Of course, I'm not allowed to make any rash decisions right now, as I'm still in complete shock that there wasn't just ONE thing I didn't have--which would have been surprising enough--but THREE things I didn't have.