I did not break down at 11:59 last night and fling myself into the laceweight, but it was a close thing. The yearning for a lace scarf was very tough to resist, but already having 4 lace projects on the needles made it a bit easier.

This morning bright & early I closed my eyes and reached into the Project of the Month bin and groped around until I had a bag that didn't contain yarn--no sense blowing my WIP marathon on the first day--and I pulled out this: 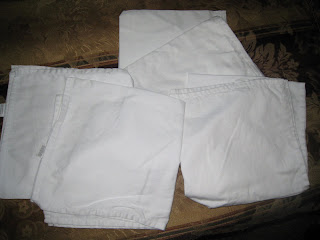 Eight white napkins that I bought quite some time ago, intending to embroider roses on them to match our dishes--which of course hadn't happened. Since I have to change the sewing machine to embroidery, and I was pathetically close to finishing my last sewing project, I buckled down and finished 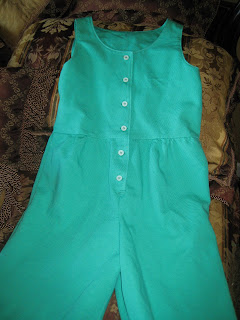 a cotton pique jumpsuit for wearing around the yard. The pique is a bit heavier than I would have hoped, but it is nice & loose for hot summer days and.....IT HAS POCKETS!!! I love pockets--probably because women's clothes so rarely have them. I suppose the women's clothing industry must keep pace with the women's boot industry, which produces boots that can actually get wet with the frequency of Willy Wonka's Golden Tickets. But I digress...

Once that was done, I could set up the machine for embroidery and I just finished the first napkin 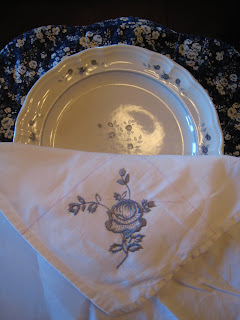 I'm going to do 4 in this slate blue--which matches the dishes nicely & accents the placemats--then 4 in navy blue to match the placemats. As soon as I go get some navy blue thread. Honestly, it looks like I own all the thread it is possible to own, and I would have sworn up and down there wouldn't be a color of machine embroidery thread that I didn't have, but I seem to not have anything remotely close to navy. I do, inexplicably, have 37 shades of "gold." which is not even slightly helpful at this point. Blast.

The July "Soup Night" is coming up in a couple weeks, and instead of serving soup I decided we'd hose a zucchini cookoff--which might mean that we are spending the evening alone--and I wanted to have prizes to hand out for the best dishes, so... 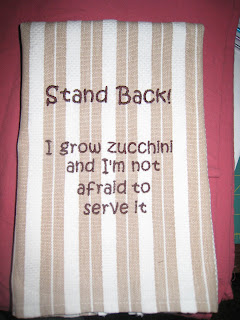 I was thinking of "Zucchini....the fruitcake of summer," but I'm not sure everyone would get that. I have 3 towels & thought I'd have prizes for the top 3, so technically I could put the same thing on all 3. Not too creative, but easy. Another thought was, "I don't have too much zucchini, I have too few neighbors." Thoughts? 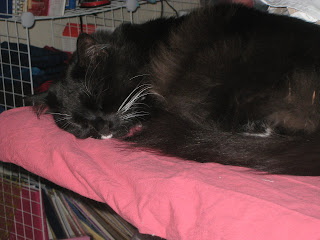 Theo was thrilled and spent most of the day snoozing in the sewing room, and I even did a little knitting, starting the edging for the blue & white blanket--which I was saving up as an "almost done" project to give me a firm boost into the WIP marathon-- 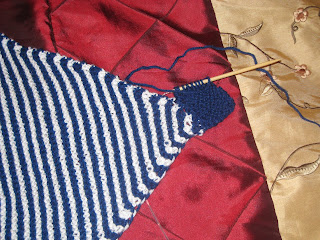 and ripped it out. I started to crochet a border, ripped it back, started 3 different widths of garter stitch edging, ripped them back, and have now decided that maybe I should start with a different project 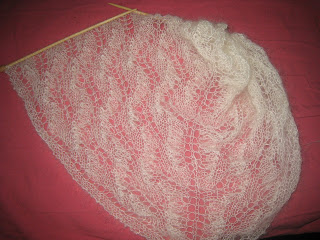 and frankly at this rate, Luna Moth is a whole lot closer to being finished than that [bleep] blanket...