I'm Going To Be Voted Off The Island

Okay--I think I'm the only person in the entire knitting world who is ever going to say this, but.......

I don't care much for the Monkey Sock pattern.

I know, I know--it's one of THE most popular sock patterns on the planet, and I don't hate it enough to frog the socks, but I have a real problem with this 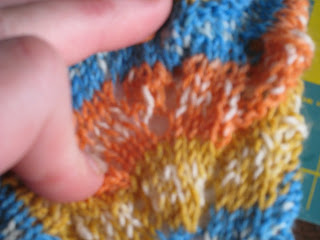 which does NOT photograph well, but the two increases are lopsided.  The problem is from the increase--there's a double yarn over, then one YO is knit into, then one is knit into the back, which does create the two desired stitches for the next row but IS NOT symmetrical--I have that one yarn over at the bottom and then the sloppy little stitch on the left side.  It annoys me.  I know, I know--it's just me, but still.....I think it's awkward and it simply irritates me every time I get to that point in the pattern.  Obviously, I have symmetry issues.....

In other news, the overwhelming vote is for SOMETHING on the wall hanging--which I agree with.  One option is a decorative stitch--which I'm practicing.  Another is some sort of braid or cord, which would give it a little texture.  Yet a third option is gimping--which I'd heard of and wanted to try, but had never done.  So, yesterday I set about to learn to gimp.

For the uninitiated--like myself about 28 hours ago--"gimping" means to satin stitch over some sort of cord, creating a raised design on the fabric.  It has been one of those "must learn that someday" things ever since I heard about it in a sewing class, but I'd never tried it. I even have a gimping foot for my machine, so I dug it out and figured out how to set it up: 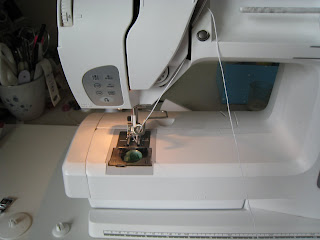 or sort of, at least.  It took me a while to figure out that there was a place to clip it in to the actual foot, but it still sort of worked, so it wasn't tragic. 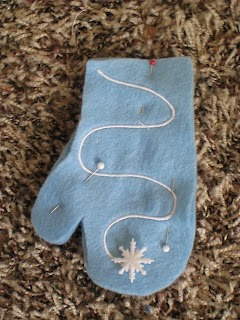 since I had a snowflake button to cover up the big boo-boo.  Turns out, my sewing machine will taper into and out of a satin stitch, which is nice.  HOWEVER, when the cording slipped out of the satin stitching (before I realized where the thread needed to be on the foot which would have prevented the whole problem), I tried to reverse to catch my mistake.  Hitting reverse while satin stitching means "taper off because we've reached the end" to my machine, which REALLY does not solve the problem of getting the cord back under the satin stitching--hence that snowflake button.  Still, live and learn, right?  There were other, more successful mittens 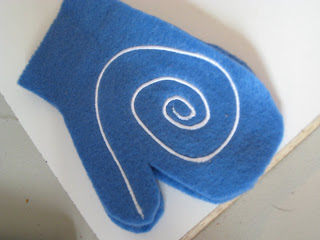 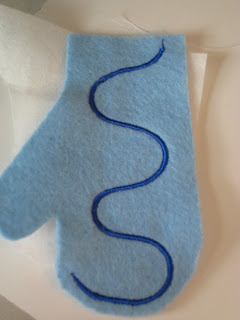 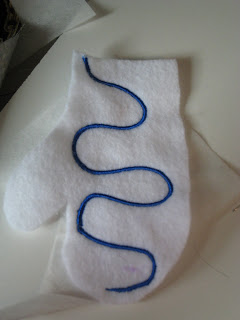 and I'm even sort of getting the hang of the tapering thing.  I'm not sure I'm ready to attempt it on the wall hanging just yet, so I decided to try a technique I recently saw on a sewing show.

Now, to date, nothing I have seen done on "Sewing With Nancy" OR "America Sews"--which are the only two sewing shows I know of (aside from quilting and I'm just not even going there)--has actually worked out for me as well as it did for the people on television, but I remain optimistic.  I mean, the odds are in my favor, aren't they?  I don't think sewing programs really have the cash to employ special-effects departments, so I assume that these things really DO work for somebody, even if they don't work for me.  THIS adventure was to put decorative thread into the bobbin and stitch on the back side of the material, creating a cool-looking effect with the decorative bobbin thread.  Luckily, I have learned SOMETHING through my adventures, and decided to experiment on scrap material first.  My first attempt was ribbon: 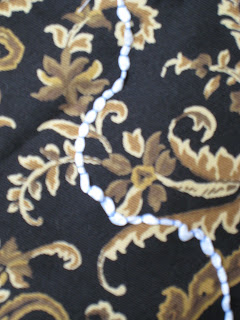 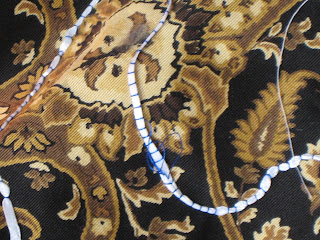 which didn't go nearly as well as it did on television.  Maybe they edited out the big freakin' snarls part.  Next I tried crochet thread, which went well enough to make it on to a mitten 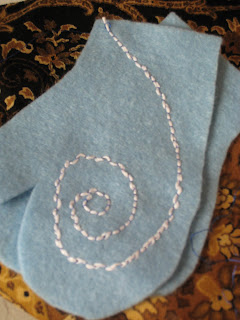 but I don't know that I would ever find any other use for it.  It's definitely not going on the wall hanging--or any other mittens, for that matter.   I don't know--maybe I'd get better with practice, but wouldn't it be easier just to stretch out the satin stitch on the gimping?  Or maybe I should have tried yarn, which has a bit more "give" to it?  Or maybe I should just quit watching these sewing television shows altogether and spend the time knitting instead.......?