My Stash Was Holding Me Hostage!!!!

Okay--perhaps not, but it sounded better than "I've been so busy that I haven't been near the blog in almost a week."

There has, at least, been some crafting, though not always by me.... 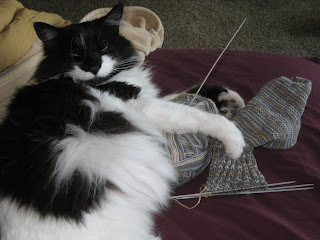 I wouldn't mind so much, but her gauge is all over the place.  I did manage to wrest the knitting away from Calisto long enough to finish the first sock, 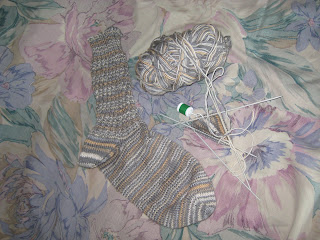 and get the second one cast on.  Theo is a different story, but Calisto can always be bribed with gardening or "kitty salon."  This little girl is a fiend for brushing.

The table runner has been finished, washed, pressed, 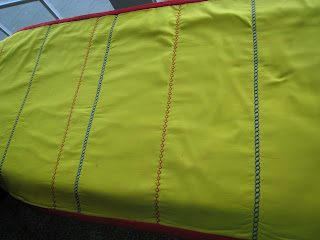 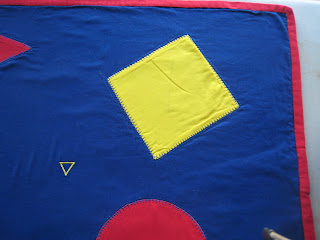 and delivered to the recipients, who were thrilled.  I ended up drawing some simple shapes and just satin-stitching them in red and yellow. 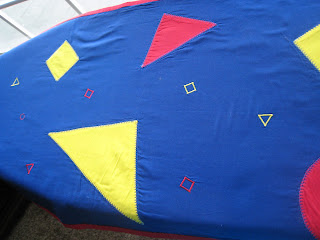 Believe me, it was faster than embroidering them as I actually have no idea how to create simple shapes on the software.  It has been so long since Jeeves worked that I'm having to relearn just the basics all over again--much less things I didn't know how to do in the first place.

The oddest thing in my "dead heat" stash dash basket is completed: 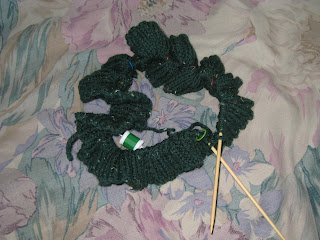 The first ball of yarn for the 2012 Christmas vests for our friends has been knit up.  I thought it might be easier to add them in small increments, and so far it seems to be working.  Just the idea of moving something OUT of my basket was very motivating. 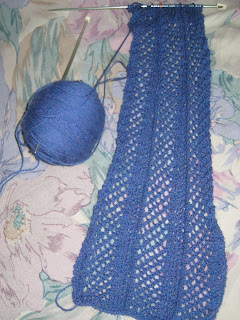 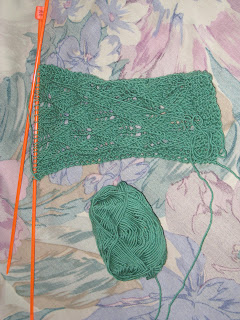 which WAS going to be a little scarf made with the leftover yarn from the green scarf (I'll be posting the pattern soon, I promise), but I made it this far before discovering (with the aid of the kitchen scale) that I had used up more than half of the remaining yarn and the scarf was nowhere NEAR half long enough, so it has already been frogged.  Now I'm thinking of making some lace edging for ivory satin Christmas ornaments--you know, once things slow down enough to find the ivory satin, which will probably not be until the garden dies or is murdered by yours truly.  I'd be okay if it was tomatoes taking up my crafting time, but zucchini???????  Please--I'd rather knit Fun Fur!