Day 6 and the third project is done: 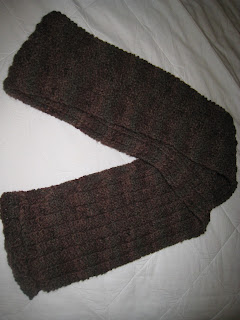 leaving me with 108 left to go.  I admit, it is seriously daunting to have to work my way down to 100, rather than just starting there.  I'm hoping to at least get below the 100-left-to-go mark by the end of the month.  That would help, I think.

I finished the scarf in the morning, then actually caught myself reading without a knitting project later this afternoon, so I immediately cast on another chemo cap: 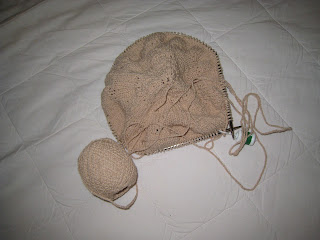 As my old Lutheran great grandmother probably would have said, "Idle hands aren't going to read 25,000 yards for the year."  Okay, I never met the woman, so I'm not sure she would have said anything of the kind, and even if she had, it would have been in Norwegian so I wouldn't have understood it anyway, but as a strict teetotaler and a woman who never allowed card games of any kind, I'm guessing there would have been SOME remark about idle hands somewhere in her arsenal.  At any rate, I've used up 424 yards of yarn in 6 days, and if by some miracle I can keep this pace up, I will have used up 25,793 yards of yarn by the end of the year.