The last few Finishing Fridays have been a bit short-changed due to other things happening, so yesterday I spent most of the day in the sewing room as a bonus day. YAY!

I am not too proud to admit that I may not get caught up without Jeeves's help, so 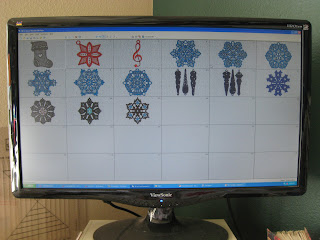 I loaded up my embroidery card with several designs I've done before, as well as four of the more-complicated designs from the package Andy had given me for Christmas.  This 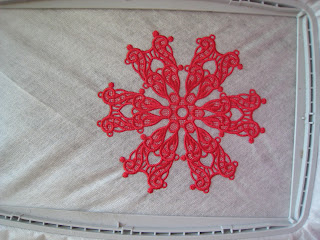 is the first piece of the first design.  The idea seems to be that it is assembled using these dots, 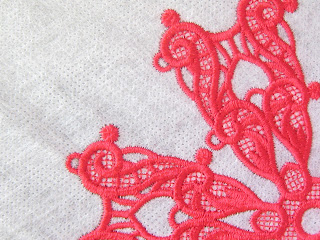 the dots go through the corresponding holes and it's all assembled.  Sounds great to me!  I was NOT looking forward to figuring out how to sew them together. 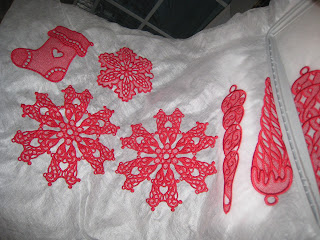 so I haven't actually tried assembling the new ornament yet, so there's only one.  I want to know what I'm getting into before doing several.

As you can see, desperation a new open-mindedness about colors of icicles and snowflakes has led me to branch out a bit, 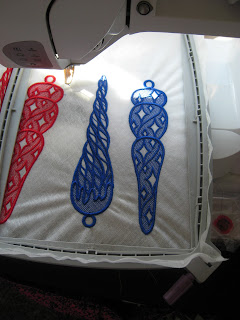 I've put red and gold PURCHASED snowflakes and icicles on my tree, so why I have to be a purist when it comes to much cooler home-made ornaments is anyone's guess, but I'm especially proud of the red icicles.  Snow can look blue-ish at times, but if one turned up with red icicles at any time, I'd be pretty fearful of what I was about to find on the roof...........

While Jeeves was pounding away I made a heart ornament with decorative stitching, 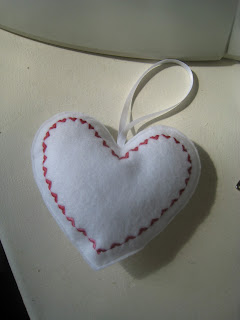 and was so excited about how nicely the hearts lined up exactly at the start and stop that I immediately did another one, 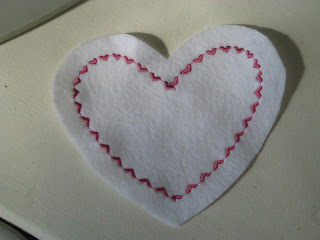 which didn't line up at all.  This one has NOT been made into an ornament because I am so disappointed in it, but I saved it. A little desperation might make this baby look a whole lot more acceptable right around Thanksgiving............

I also made a new little felt tree, 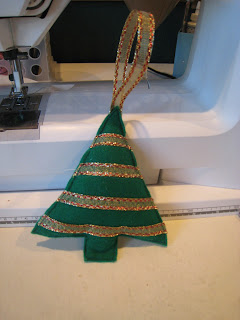 which is quite fun.  Incidentally, only use fabric glue to hold ribbon in place if the ribbon is solid.  This is sort of a mesh in the center, and not only did the glue not hold it down even long enough for me to stitch the ribbon in place, it got on everything.  Until I glued my entire sewing room, I was really very proud of myself over this ornament.  Like so much else, over the years I have been purchasing ribbons and trims when they're on sale, but hardly ever using it.  This is now my THIRD ornament with some of my ribbon stash, so I'm feeling much better about those purchases.

My ornament bin is filling up, 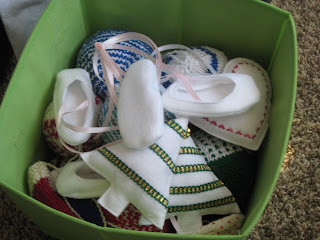 so I'm going to have to think of some other way to store these if I keep up with the felt ornaments and knitted balls.  Yep--hadn't considered that part.  Well, to be fair, would anyone commit to 365 ornaments in one year if she HAD thought much about it...............?