Finally!  First, a picture of the new socks: 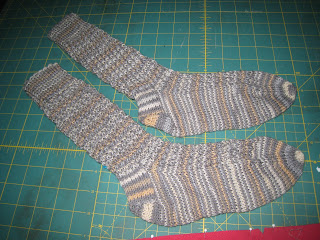 which I thought about keeping for myself, but if I put them in the gift bin I get to count them as one of my 12 gifts for the year.  Which works for me, as I really don't wear gray.  AND this used up the last of the 3 double-balls of this yarn, which I bought at least 6 or 7 years ago, which put me over 10,000 AND gives me number 65 in the "all used up tab."  I promised myself I could think about stopping Cold Sheeping when I get that tab to 150, and am really trying to be good and not just focus on the single-ball entries.  This one only showed 2 because one was knit up before Ravelry, but there were at least 3 origininally--if not 4.  I am thorough when I go on a yarn binge.

I was so excited about hitting my target on time that I whipped out another Tribble: 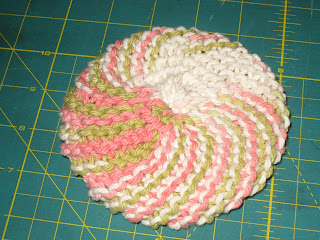 though it doesn't do anything for my yardage.  Because these take so little yarn and it's so hard to estimate, I've decided to just count the ball when it's all used up--and just my luck this is made with a 603-yard monster skein.  That's a lot of Tribbles--which I guess one should expect..... 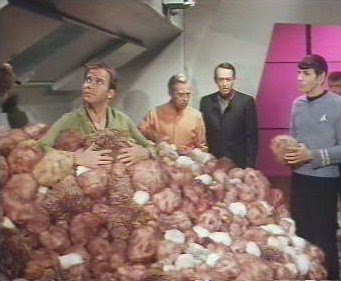 I have already dug into the yarn bin for a new project: 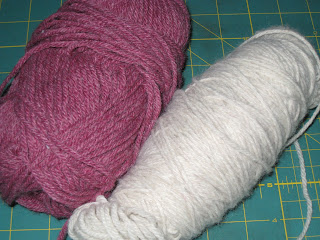 which will be either a hat or a Baby Surprise Jacket.  I should do the BSJ as I think the 12 sweaters idea is going to be the real hurdle this year.  Or maybe the 12 sewn clothing items, since this: 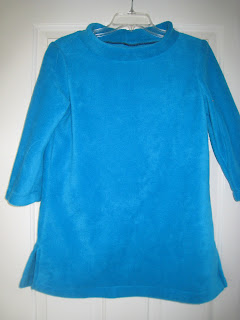 was only number 2 and it's mid July already.  I finished this last week, but didn't get a photo posted.  There's something really perverse about finishing a fleece tunic when it's 108 degrees outside, so I tried it on briefly enough to assure myself that it fit and has the correct number of arms and everything, but anything more than that will need to wait until the snow flies.......We have dropped down to 100 yesterday and are targeted for "just" the mid to high 90s today and tomorrow, but I have decided that summer and I are just not on speaking terms this year.  We actually had TWO days of 108 temperatures, which is totally uncalled for.  It nature wants me, it can behave better than that, and I refuse to have anything to do with it until it does.