If Shakespeare Had Learned To Knit.....

For some reason, when Hagrid pulled out knitting in the first Harry Potter book, it made me absurdly happy.  I don't know what he was knitting, or if he ever finished it, but it was just this little glimpse of a shared interest and it made me happy.  So, I'm thinking that maybe more of our literature could use a little knitting--you know, to make it more accessible....which of course led me to......

Romeo and Juliet:  The besotted Juliet knits her beloved a gorgeous sweater in an all-over cable pattern, which invokes the dreaded Boyfriend Sweater curse and Romeo immediately dumps her, and they both live on to marry others and live to ripe, old age.

Gone With The Wind: When Rhett leaves Scarlett after not giving a damn, Scarlett remembers she still has her beloved Tara, which she converts into an alpaca farm and she makes a fortune selling Damn Yankee Yarn, which will later inspire a musical of a similar name.

Wizard of Oz:  Dorothy doesn't end up with the silver slippers as metal footwear would cause some pretty severe blisters.  Instead Glenda gives her the Wicked Witch's comfy felted clogs, which are so comfortable that she decides to stay in Oz and gets involved with the Scarecrow, whom she always had a bit of a thing for anyway.

Kafka's Metamorphosis:  Gregor awakes to find he has turned into a bug during the night, but he has on a nifty fair isle sweater that strangely has room for all 6 legs--which doesn't make the story any stranger than the original

1984:  Big Brother catches Winston knitting in the unapproved "continental style," and subsequently sends Winston to the Ministry of Love of Wool for "re-education."

Dante's Inferno:  Tantalus is surround by baskets and baskets of the finest cashmere wool, but every time he reaches for his knitting basket, it is jerked just out of his reach

Hamlet:  When Ophelia is rejected by Hamlet, she does NOT kill herself, but takes up knitting, opens her own yarn shop, and decides that she's better off without that wishy-washy boy anyway


Why yes, the glass of wine is half-empty.  Why do you ask?

The slip-stitching of the binding is going pretty slowly (though compared to the THREE AND A HALF YEARS that the rest has taken, it's pretty zippy), 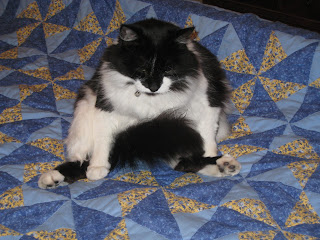 but at least Calisto is getting some use out of it as a yoga mat.
Posted by Toni at 5:56 PM No comments: