To be honest, I'm so proud that I remembered this. I get distracted so easily by things that "need" to be done and I get going on other projects and forget about my resolution to take some time for hobbies. But I am proud to announce that I DID NOT CAN ANYTHING TODAY!!! Shocking, I know. So, I spent most of the day in the sewing room.
First the August scarf got a few rows: 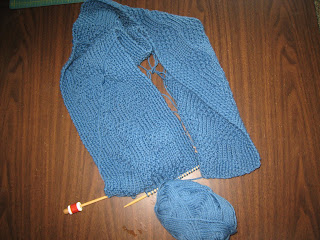 but I thought it had a pretty good chance of some knitting tonight before bed, so I moved on to..... 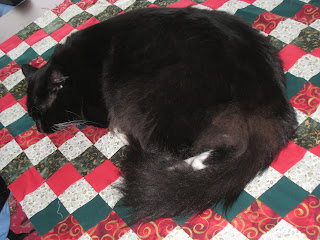 The Christmas quilt top I started back in January! (And if you're wondering how long it took for there to be a cat on it, 23 seconds tops.) This 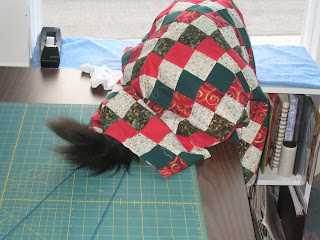 took as much time as it took me to walk downstairs for more coffee, locate a new bottle of distilled water for the iron, fill the iron, and get back to the sewing room. Makes you wonder what the state of affairs might have been had I decided to throw in a load of laundry as well, doesn't it?

I knew I wanted to do a one-inch sash followed by a wider stash, though I thought I had planned a small red stripe 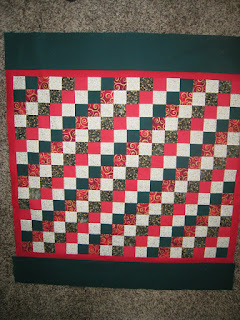 followed by a wide green, which actually is the opposite of what I originally laid out, but I think it's okay. There are strips cut out for a second one of these, so I'll reverse them on that one.

I got all sides of the red done and two of the green. Now I need two more sides in green and it will be ready to layer for quilting. Maybe two more Finishing Fridays to go on it????

And the dratted audio book is 22 hours long--not 18! I still have 8 hours to go and I had my first nightmare last night. I am going to be the only person in history to be treated for stress-related disorders caused by Book Club!!!