One week from today will be the last day of the spending ban--for this year at any rate.  Can you tell I'm just a wee bit excited?

Actually, I'm probably more excited about the crafting vacation the following week, but they sort of go hand-in-hand.  I canned two rounds of crushed tomatoes this week, which cleared up a tiny bit of room in the freezer for the rest of the tomatoes as they ripen, and if I make a huge batch of tomato soup to can next week, I think I'll be sort of done with the canning for a bit.  I'd still like to can some roasted red peppers, but it isn't mandatory as I still have some left.  I should at least be able to take a week off from canning to CRAFT!!!!!

I've been wimping around here with a cold the last two days, though Tuesday I still canned tomatoes because I'd gotten most things ready the night before and being around the steam actually helped, but yesterday I rested and, 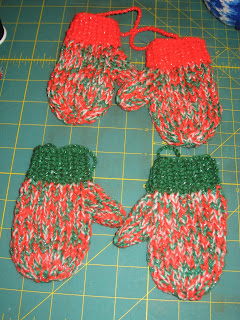 made it to 292 ornaments.  Since I'll run out of white yarn if all the ornaments are something with a white accent, I wanted to try finding some accents that didn't really need white.  These are fun, but I think the multi-colored yarn might have more of a future as scarves or hats for future Mr. Flurries, 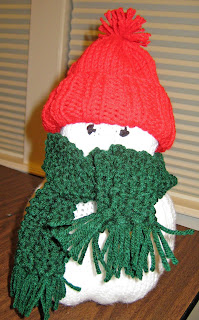 but maybe not for ornaments.  Next year I'm going to try for 100 finished projects again, so I see a few of these cute little guys in line for next year.  Basically, I'm ready for anything that ISN'T an ornament..........