Getting Back To Normal

Thanks everyone for the birthday wishes, though I guess I should have explained that I actually turned 40 in September, and Andy's sister and her family had lined up the birthday adventure for when we joined them in Colorado for our niece's graduation.  We were there 5 action-packed days, and I think I just caught up on my sleep last night.  :)

It technically wasn't my first white water rafting trip, but it was certainly my first one involving Class III or Class IV rapids.  I believe the technical classifications involve something about water per square foot or speed, but for we laymen, I'd say Class III is when you start thinking you could die, Class IV is when you think you really might die, and Class V is when you start converting.  We were with a brilliant guide who didn't tell us until we were through it that one of the first rapids we went through was a Class IV, so that made it much easier to do the rest of the trip.  I'll admit, I was quite nervous about the whole thing because I'm not an adrenaline-sport person, but A) I was so touched that Andy's sister and her family would think of doing this for my birthday, B) they're always fun and I would regret not being able to do the things they come up with, and C) I don't think very many things are nearly as frightening to do as they are to think about--with the sole exception of steeks.  So while I'd definitely say it was a bit frightening, it was also a LOT of fun--which I have never said about steeks.

Since this was a visit to the folks we have now dubbed The Adventure Family, there wasn't time for much knitting while we were there, but I did finish a scarf on the plane, 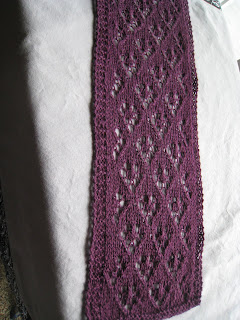 and I have finally knit up all the yarn from the first attempt at the back of the pink sweater, and can finally start counting yardage again. 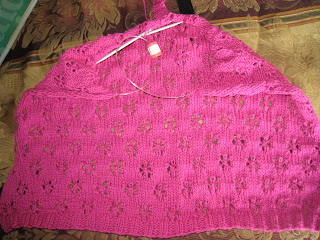 There hasn't been a great deal of crafting since we got back--though Theo has been staking out the sewing room just in case: 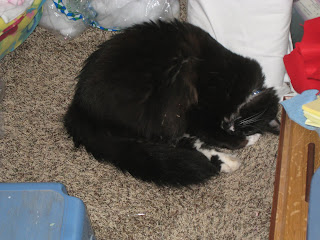 He did get to "help" me iron some fabric for a birthday gift for a friend, 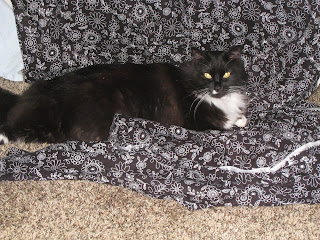 who luckily likes cats and will understand that no crafting projects are ever allowed to leave this house without a layer or two of cat hair.