And I use the term loosely.  Not only did I not finish anything yesterday, I had to dig this out of the closet 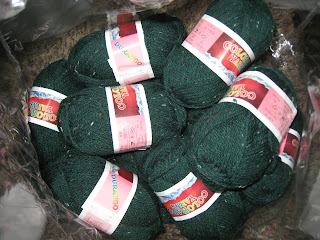 as a bribe to get myself to keep working on that darn scarf.  I have not yet cast on, but I have bribed my inner knitting child (who is frankly a serious brat who could use a real spanking once in a while) with the promise that I can cast on as soon as I finish this: 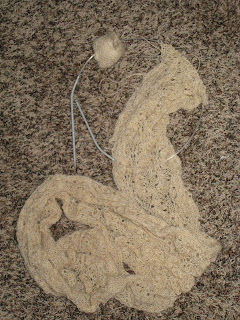 The alpaca vacuum!  Actually, it's looking much better with a lot more knitting and my own secret technique.....................pulling on it really, really, really hard.  I think I'm one row away from starting the bottom edging--without having to set it aside for a really short friend, even.

The majority of Finishing Friday was spent with the project actually farthest away from completion: 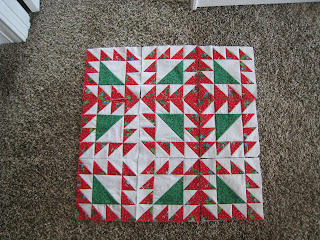 because somehow that seems like a good idea to me.  These are the first 9 blocks laid out--there will eventually be 35.  I admit, I am REALLY pleased with this so far--and probably not just because it's a really idiotic thing to be working on during a year when I'm trying to finish 100 projects.  I like the idea of blocks that create another pattern.  If I were better at embroidery, I'd put some sort of design in the white corner squares being formed.  But....I haven't forgotten the pillow case incident yet.

This morning, thanks to 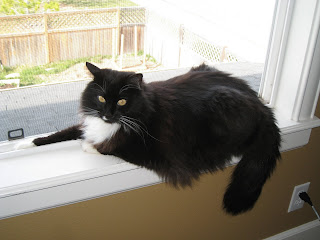 I was awake at a dreadfully-early time, and since my knitting was in the bedroom where Andy was still sleeping, I decided to allow myself 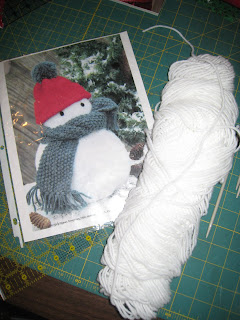 A new project!!!!!!!!!!!!!!!  And, mercifully, a fast one.  Of course, it uses up the Red Heart acrylic yarn, which has technically never been counted as being part of the stash, so it might be a bit hard to count it as used up from stash,  but at least it's a much faster knit than the sweater I was lusting after......