So for Finishing Friday I was really hoping to dazzle everyone with a display of finished projects--and to be fair, the green scarf did get finished late Friday night, so there is a finished project number 10, which puts me slightly ahead of my goal.  Only very slightly, but I have a feeling this year will be a "grasping at anything" sort of year.

Finishing Friday is the day of the week when my optimism is at it's highest.  Could I just work on the pink jeans jacket?  Oh no--that would have been far too rational for a woman facing an entire day of crafting freedom.  Instead.........In my very last fabric shopping trip of the year, I came across these: 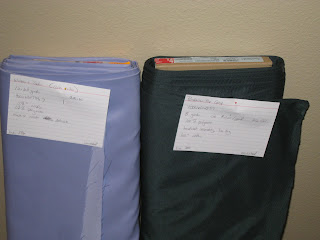 in the clearance racks.  The lavender is 12 yards of nice satin that I scooped up for $1 a yard and will be converted to a Halloween costume.  After one disastrous attempt to make a costume with cheap "costume satin," I have learned that cheap fabrics are never worth working with, so I hunt for good fabrics in clearance bins, which is the only way to be able to afford to make costumes.

The green is 8 yards of suedecloth (aka moleskin, microsuede, whatever) in a deep hunter green, and while I have learned to NEVER sew this stuff into anything involving zippers or narrow hems, I love wearing the stuff.  However, as Valentine's Day is coming & we always make each other gifts, I thought it might make nice robes.  This: 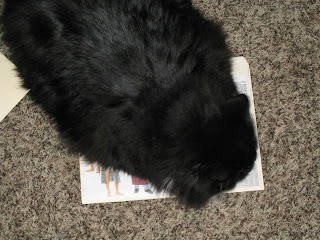 is the pattern I'm using for Andy, and this 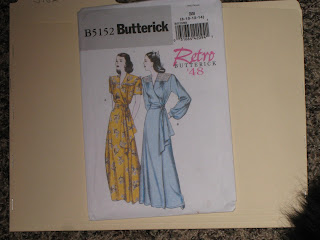 is the one that I'm making for me.  (Hey, it is 8 yards, after all).  I always find it easier to cut out all pieces together if I'm using the same material for two patterns, so Friday the cats & I laid out material & fabric all over the bedroom floor.  The robes both feature really big pattern pieces, so I decided to cut out a third project 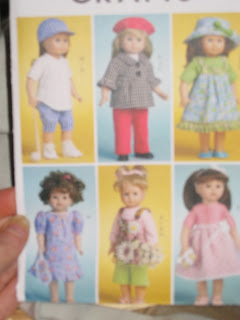 I think the little red beret and pants will be cute in microsuede, and it seems silly to use up whole pieces of material for doll clothes when they can easily be made from scraps.  So, there was a lot of pinning & cutting, though I only got half the pieces done before my bad arm was really sore and needed a rest.  And that would explain why I started the day sewing and ended up with a finished knitted scarf.  See, it really does make sense. And it finally gave me a chance to photograph the pattern without Theo 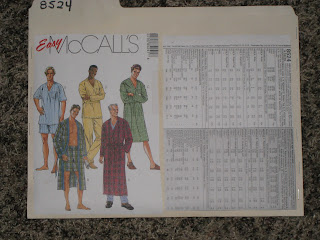 He might indeed be the faster of the two, but I am the more patient.

Finishing the scarf gave me 1132 yards of yarn for the month so far, and in order to get to 25,000 yards this year, I need to average 2083 yards a month, so I'm a bit behind.  I pulled out the current beaded ostrich plume scarf 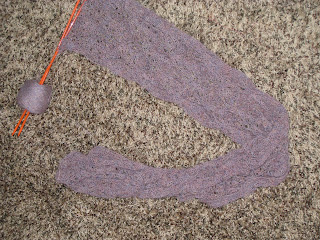 and while it is much closer to being finished, beading is a very stupid idea if one is trying to knit quickly.  Still, I love this scarf.  I can't ever seem to get a picture that shows the beads, but they are clear with shades of blue & purple in the center, so they really match this yarn quite well.  Can one become addicted to beads?

And, for unknown reasons, showers never have places to hang washcloths or brushes or anything, so last night I started this: 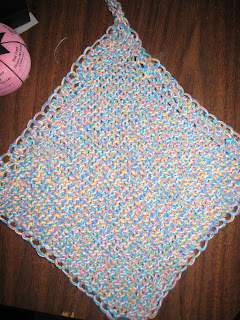 and it is now hanging from the knob in our shower.  I am guessing it maybe took 40 yards of yarn, and I like it so much that I am about to cast on another one.  It's just garter stitch with a yarn over at the beginning of each row, with the decrease shaping being achieved by following the yarn over with 2 k2togs.  In the next one, I might spread the two decreases out just a bit, but I don't get very fussy about washcloths that aren't going to be gifts.  It only counts as half a project, so I need to do a second one before I'm at 11 projects for the year.  I can't make things too easy on myself, after all...................