Yes--I do still exist and there has been some knitting, if no blogging. We have been on a marathon trip of visiting friends on the east coast, and I thought about trying to do a few updates while traveling, but we still have the psycho ex-wife stalker (5 YEARS after the divorce, mind you, and 2 years after Andy remarried--talk about pathetic) and we find it best not to announce any plans on the blog as she seems to be a few pom-poms short of a hat.

The only good thing about long flights is the uninterrupted knitting time. At home, I could be doing other things--laundry, cleaning, taking care of the garden, painting the dining room, cleaning out that back room--but in a plane, there is NOTHING else I could be doing except sitting. In fact, those cheerful airline attendants would get quite cranky if I really did try to be up cleaning something, so this is the ultimate guilt-free knitting time. Which is perfect, as Theo chose to inspire some last-minute guilt as we were leaving: 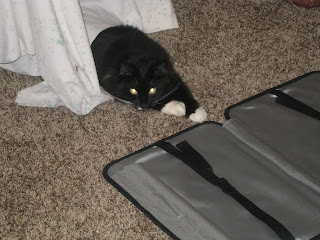 Could he possibly look more forelorn?

I finished the front of the aran baby sweater: 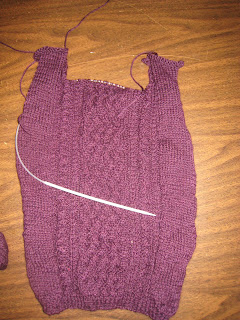 which is by far the hardest part & the part that landed it in the Project Time Out Bin in the first place. The back still isn't to the point it was when I had to rip back for the sleeve shaping, but it's getting there. 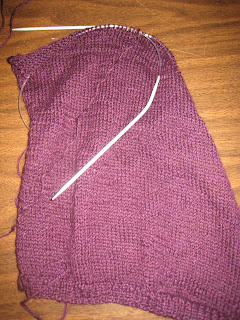 Brace yourselves, this one is going to come as quite a shock: dem fischer sin fru went with me and actually got some attention!!!

I know--how surprising is that? Does anyone even remember that I had started that one? 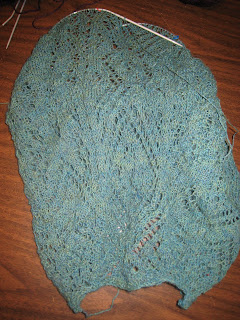 Clues one and two (out of 7, unfortunately) are done, and I'm even a few rows into clue 3. I realize it's a bit hard to see in this picture, but it's more than doubled since we left. I could take it off the needles to get a better picture, but then it might not ever make it back ON to the needles, and this project has a hard enough time getting attention as it is. I think I might finally be achieving personal growth as a knitter--not the sort of personal growth that would automatically slide it right back on the needles and start knitting again, but the sort of personal growth that admits that I would be strongly tempted to ignore it the moment it was off the needles. I know I'm that sort of knitter. 27 WIPS--we all know I'm that sort of knitter.