Gaidig raised an interesting point yesterday--bigger needles don't always mean faster knitting.  Actually, I don't often knit with anything bigger than size 8s because the big needles feel uncomfortable.  Of course, there are still faster options than this: 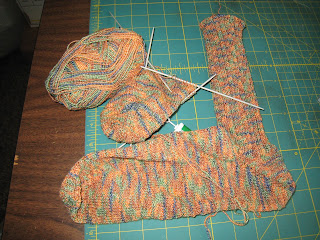 which is the project that got all the attention yesterday.  Does anyone think size 1 needles are the fastest knitting option?  I was actually planning on tackling some sweater WIPs because I have THREE sweaters really close to being finished--two of which I can even locate.  But, Monday I lifted some weights, walked in the pool for an hour, assembled the monster tree: 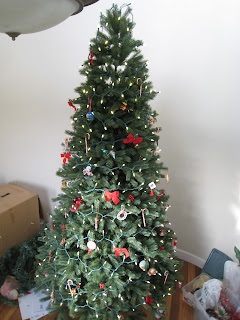 had a turkey-rematch, vacuumed the stairs, and did lots of physical therapy exercises.  As you might have guessed, Tuesday was a bit painful, but my back did pretty well--or well enough for me to think another hour of walking in the pool yesterday would be a good idea.  So, whether or not the socks are fast or slow knitting, they are the only current project that are considered "safe" for a knitter doped up on pain killers and Valium while she ices her back to reduce inflammation.  I think that's a whole new knitting category for me......