One problem I've never had: too many matching placemats.  When I first took up sewing again (after loathing it in 4-H), I made the same placemat pattern over and over--both because I liked it and because it was a good way to learn.  However, because my dining table sat 6 and I had 6 chairs, I never made more than 6 placemats and 6 matching napkins.  Which was fine at my old house, but now that we've been here 9 years and things have had a chance to end up behind the washing machine or in back of the cabinet, it's a real challenge to find 6 matching placemats when we have company.  So, I have 12 placemats made: 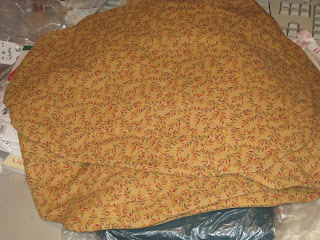 which almost used up all 5 yards.  And THINKING AHEAD, I have actually written this information on the pattern I drafted for future reference.  I am not even sure how to wrap my mind around this new level of organization.

The batting I used for them is a poly/cotton blend that says it should be quilted every 4 inches.  I don't know how that works for placemats, so I did toy with the idea of doing an outline embroidery smack in the middle of each one, 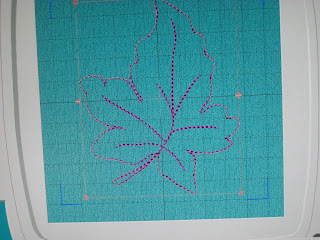 but I thought that might be a bit busy and it would be covered up by a plate anyway.  I tried edge-stitching all of them, but even with the walking foot, it made the edges all wavy.  So, 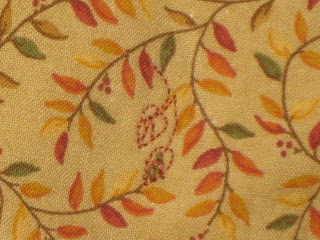 I picked out a subtle little decorative stitch that will hold the batting in place but will blend into the print.  I had a different one in mind at first, but it was too noticeable.  So, the placemats progress.  2 have all the "ties" in place, and I still need to slipstitch some edges together.  When I thought I was going to be edgestitching, I used fusible webbing to close the gaps up, but a few didn't get close enough to the edge, so I'll go back over those.  Still, almost a finished project and 5 yards of the stash almost used up.

I had to stop sewing when I hit my limit for sitting, so instead: 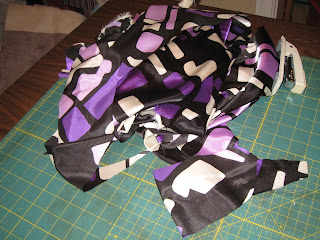 I cut out a blouse from the purple blocks fabric originally intended for Andy.  I had been leaning toward a jacket of some sort, but I don't have that much purple for it to go with, and it was in danger of becoming one of those fabrics that lingers in the stash because I can't commit to a pattern, so I grabbed one of my favorite blouse patterns with simple lines and laid it all out and cut the pieces out before I could second-guess myself.  Ha!

I'd also dug out this home decorating fabric which I bought in November of 2013 to make a fall jacket. That's WHY I bought it, but it must have been a clearance fabric, because I have more of it than I need for the jacket, so even though I'd bought it specifically to make a jacket, I had started debating about whether or not I should use it for something else. 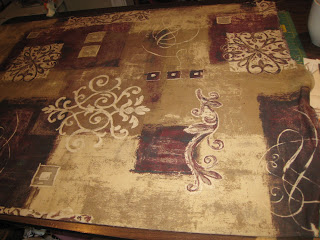 Now, is this just crazy?  I find myself doing this all the time.  I have TONS of fabric, but I'm having a hard time committing to a project with it.  So, 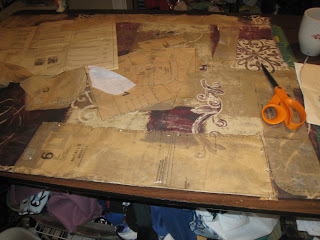 while I am feeling resolved and wanting some free space in the sewing room, I am laying out the pattern for the jacket.  Ta-da!!!!!!  Honestly, I can understand waffling a bit with really nice fabric, but I'm doing it with ALL of them.  How weird is that???????