Thursday was crazy busy at the store, but theoretically this is our slow season, so the stores are closed for both Saturday AND Monday for the 4th of July holiday.  Since Friday is my usual day off, that means this is a 4-day weekend for me.  YAY!!!!!!!  And do I need it.  I went back to work on such short notice that everything has been really rushed, and my back and hip are exhausted.  Thursday my hip had managed to irritate the sciatic nerve, which is hasn't done before, so I spent the day trying to deal with sciatica.  While it doesn't hurt as much as my long-standing hip issues, that does really, really hurt and it was really difficult to drive home.  I've made an appointment to see my physical therapist again, but it will be two weeks.  In the meantime, stretching and walking are helping it, but I'm still sore.  However, 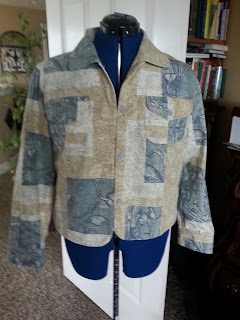 I have finished what I think is one of my longest-planned projects.  I've had "map fabric jacket" on my project list forever, and I think this is the fabric I was describing.  Looking at it, it has nothing at all to do with maps, so there could still be a map-themed fabric somewhere in the stash, and in that case, I just don't remember buying this fabric.  And I got a cute jacket out of it anyway.  I've even started 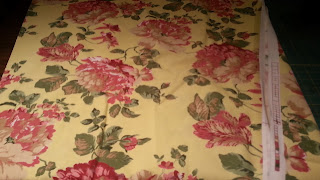 two more.  I'm trying to make two of the same pattern, but I have 3 yards of this fabric and technically need 3.25 for two jackets, so IF cutting them out concurrently doesn't solve the problem, I'll use white fabric for some of the linings and cuffs and that sort of thing on one of them.  I think that could be cute anyway.  I also 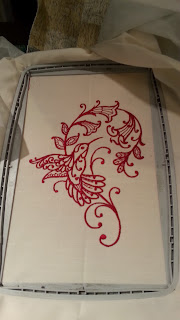 finished the red embroidery table runner, as well as two others, and finished embroidering the 6th one, which I hope to hem today, using up every last bit of that fabric.  Yay!  I'm at 65.4 yards of fabric for the year now, and still have today and tomorrow off.  Theo is, of course, 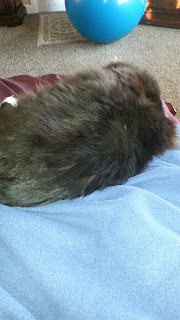 very excited that I'm home with him.  The fourth of July is always a stressful time for animals, and Idaho has the DUMBEST fireworks laws in the country.  For reasons that can only have involved money from the firework stand owners, it's legal to buy "illegal" fireworks provided you sign a waiver saying you'll take them out of state to set them off.  As if Oregon isn't 10 times smarter than we are and just bans them outright, so OF COURSE they're set off here.  This year the illegal-firework-caused fires started early, and one family already lost their home.  But what better way to celebrate individual liberty than to lie about a purchase, then burn a stranger out of their home and waste a bunch of tax-payer money on putting out fires?  We're not even smart enough to charge a nuisance tax on the things to pay for the fires that are caused Every Single Year.  So, the cats are permanently attached to me for the weekend, and I've put them both on de-stress meds for the weekend, and am REALLY trying to be a nice enough person not to wish that the fireworks enthusiasts of the neighborhood will blow a finger or two off this year.