I called the dealership yesterday, and the part still hadn't arrived yet.  I believe he said it was coming from Tennessee.  According to Google Maps, it would take 1 day and 8 hours to drive from Boise, Idaho to Tennessee.  Throwing in a night to sleep and a few stops for eating & peeing, that still doesn't explain how it could take longer than 16 days for a part to come ONE DIRECTION ONLY.  I realize they probably shipped it via the cheapest rate possible because it is warranty work & they can't stick me with the bill, but it does make me wonder about shipping companies.  If you give them insane amounts of money, your stuff arrives pretty darn quickly--like in that 1 day, 8 hour time frame.  If you give them a slightly less insane amount of money, they'll deliver it less speedily--like someone taking breaks to stop, eat, and occasionally pee.  If you give them the least amount of money possible, how do they stretch it out for longer than 2 weeks?  Strap in on the back of a sight-seeing bus that is doing to stop at every wax museum and large ball of twine exhibit on the way????????

I have accepted that I won't have Jeeves for Finishing Friday yet again, but I can't help hoping that I might get him back before we hit day 20, so I have been doing a little "stocking up."  You know, just in case the three garments and the summer towels weren't quite enough for the upcoming marathon.....

First we have more towels: 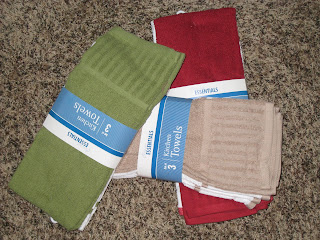 then I found some tablecloths on clearance that I want to embroider.  These will be decorated for Soup Night, 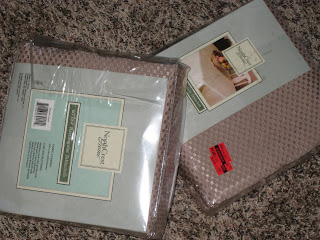 and these with snowflakes for winter 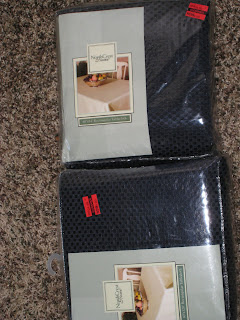 (There are two of each because when we do parties we always bring out a folding table to put in our dining area along with the regular table.  The thought of finally getting to do embroidery hasn't snapped my brain THAT far yet.......)

I will, of course, be doing a test run on scrap material this time, because this 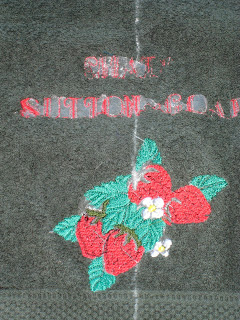 is what happened when I trusted the repair man to have double-checked his work.  The thread tension was set WAY too tight, so the thread kept breaking, and because the buttons didn't work, I couldn't back up.  So, it's basically ruined but at least now I know not to trust the repair man to have actually checked his work.  $89 in labor just doesn't go as far as it used to, I guess........


I also picked up some material for a new picnic bag idea I've been kicking around.  I want a heavy material that would be durable but washable, so I picked up some green denim 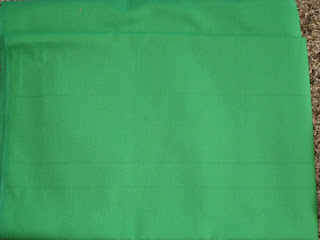 for one version, and this 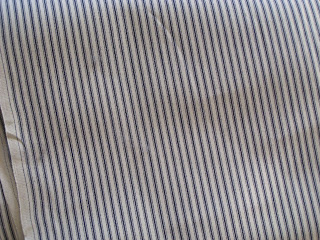 for another.  It's the old blue & white woven stuff called "ticking" that they used to make mattresses out of.  I remember seeing a lot of it as a kid, and it must be pretty tough stuff.  I think I'll embroider designs on each of them--something a bit old-fashioned for the ticking.

Meanwhile, Theo is holding out for cutting out YET ANOTHER project 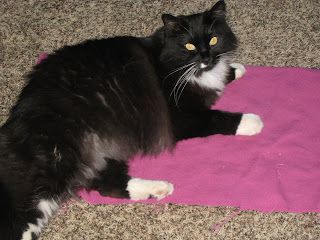