It might have been nice to use that sort of once-in-a-lifetime event to, say, win the lottery, but since I don't gamble (except for not always checking gauge) and have never bought a lottery ticket, that was probably pretty unlikely.  So I'll settle for: 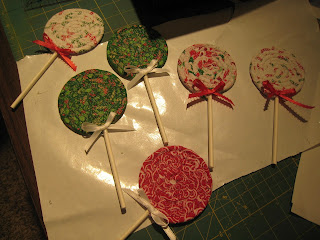 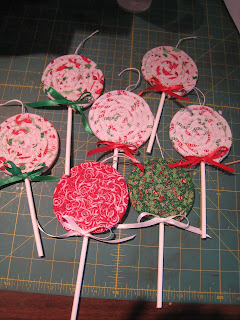 More lollipop ornaments!  There are now 16 of them, and I swear it wasn't just to get 4 quick finished projects.  Partially, of course, but also 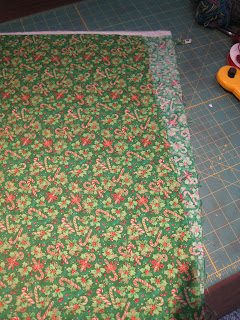 to see if this was a good way to use fabric when it was cut by drunk monkeys.  Honestly, both sides are that crooked, and I can't even lay it out badly enough to figure out how they did it.  I'm using 1-inch strips the full width of the fabric for lollipops, so uneven strips don't work quite right for those, but it will be fine for when I graduate to fabric-covered bowls and baskets.  I was tempted to try one now, but that will be a good carrot for when a couple sewing projects are finished.

I'm getting a little extra crafting time this week because I overdid a bit at the gym on Tuesday and have been mostly in bed on the heating pad.  I had hoped for a walk today, but 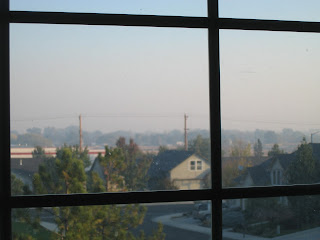 Boise has been in code red air quality this week thanks to YET ANOTHER human-caused fire that has claimed at least 3 homes so far and is driving Idaho's fire-fighting costs even further into the red.  We live in high desert, haven't had rain in months, and have had a HORRIFIC fire year, so one would have thought people might be extra-careful about fires this year, but no.  Idaho made national news earlier this summer for one bright spark who started a 73-acre blaze because he set his toilet paper on fire when totally surrounded by the brown, dry grasses in the foothills outside of Boise (which you would normally see in the picture).  So, it's indoor only exercise this week, and even that is getting difficult.  So, I've been knitting, and I've even started 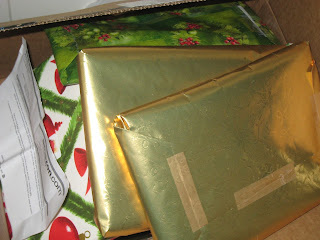 wrapping Christmas gifts!  I know--how crazy is that?  But there's a LOT of them, and I've been so sort that for the last 2 days, I could only stand for a while, which doesn't leave time for big canning or sewing projects.  Wrapping gifts, however, works pretty well AND quite a few have to be mailed and the earlier the better for that.  And makes me look really organized, doesn't it?  Provided, of course, you haven't seen the sewing room.....................